blo, because mondays don't have to suck 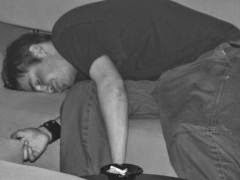 story & photos by todd ~ Monday. What a horrible day to do anything. After surviving a weekend full of some of the hardest partying you have done in months (for some of us, years), now one of your best friends is on the phone and wants you to come out and party some more.

You're first thought is, "Are you Crazy? I just turned my world upside down this past weekend. I slept 18 of the 24 hours that they call Sunday, woke up late this morning, was going to be on time for work until some idiot rolled their car over in the middle of the interstate and my boss bitched at me for an hour because I was 5 minutes late, and You want Me to do What?"

On the other end of the phone, your friend tells you, in their best 'pretty please' voice, "Oh, Come on. It'll be fun. We'll just go down to the Club and have a cocktail and listen to some music maybe find some boys / girls. Who knows? There's a DJ that's been playing off and on down there on different days of the week that finally has settled in to Monday nights. He plays a a pretty good range of music, from House to Techno to Hip Hop to whatever. Old and new. C'mon, we gotta check it out! I heard that tonight it's supposed to be a Pajama Party!"

Staring bleakly down at the Chicken Noodle soup that you thought would make everything just a little better today, you think to yourself, "Eh. Why not. I'm not doing anything else tonight except watching re-runs of re-runs on TV and doing laundry. Besides, I'm pretty sure that my boss will find something else to complain about before this day is over, if for no other reason than to make my Monday as miserable as they possibly can. 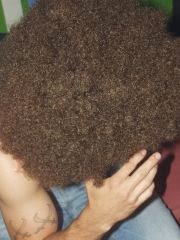 "Yea... Ok. Why not." slips out before you have much more of a chance to think about it and a few minutes later, while hanging up the phone, you think, "That's great ... Tuesday is going to hurt just as much as today did."

There is a brief pause around 4 pm so that your boss can can pull you in to a conference room and tell you how dissatisfied they are with everything you are, and everything you have been today. "Whatever.", you think as you walk out of the cold, fluorescent-lit cubicle world, tacking on a "Good Riddance" as the doors to the building slam behind you.

Arriving at home, you look around at the remnants of your past weekend's life and think, "Ugh... I do need to get out of here." Realizing there is a restaurant across the street from the club, you call your friends and tell them to meet you for dinner down at 'The Dog'.

After a few cocktails and some food, feeling much better than you did this morning, you are finally in the frame of mind to go see what's going on across the street. One of your friends hassles you for not wearing your PJs, but you don't really care, you are hiding them underneath your clothes because you don't want to be the only person of 10 in the room wearing PJs. I mean seriously, we all know how Mondays are here. 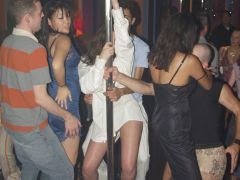 Paying $5 and walking in, much to your surprise, there are about 20 more people than you had actually expected to be in the whole place.

$1 Wells make everything a little easier for us broke folks. Order two, but when the bartendar asks you, "Would you rather just have a Double? Those are $2!" You can barely contain yourself as your inner-child squeals, "Yippee! Cocktail Time!"

In the back room, there are probably already 100 people there. Some House tune that you haven't heard in probably three or four years is playing, the floor is packed and nearly everyone is "gettin down" in their Pajamas.

After a quick change in the bathroom and running out to your car to stow your clothes in the trunk, you return to find that the crowd is not diminishing at all. In fact, it's growing at an exponential rate. The front room is getting a lot more crowded and the back room is maintaining it's own, while steadily adding people from the front.

DJ Two Heavy is spinnin up just about anything and everything on the CD decks, even requests here and there and he's grinning from ear to ear as the dance floor starts to really get it's groove on to an older Trance anthem.

Suddenly, out of the corner of your eye, you see something whirling around from the ceiling and realize that they have a stripper pole planted in the middle of the floor and some leggy blonde is putting on quite a performance, much to everyone's and amusement. Some even try to climb on and do there thing, once she steps down, but she's no amateur. 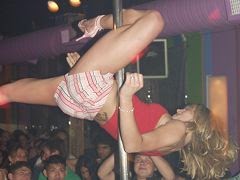 Before you know it, there has been a lot of Rum and Coke that has made it's way down your gullet, you have been dancing non-stop for two or three hours with a hundred or so other people and now, it's 3:00 am and it's time to go.

Thinking, "Oh Crap. How am I EVER going to get up?", you drift out the doors with the help of some friends, everyone giggling and stumbling a little. Saying goodbye, you manage to find your way back home. Curled up in bed, your last though, as you fall asleep, "Who cares how I get up, I had a good time for a change. In fact I think I've had one of the best times I have had in a long time. I'll worry about all that waking up stuff when the stupid alarm goes off, that is ... if it survives the Snooze Game."

This little story is mostly fabricated, though I suppose it could be more true for some than others. Either way, the Club is real - The Empire Room. The bartenders are real. The drink specials are real. The good music is real and the good time are real. 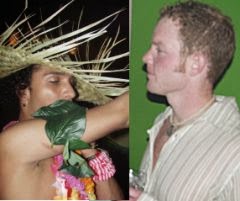 I had an opportunity to speak with most of the people involved in organizing the Monday party that they affectionately call, "BLO: Because Mondays Don't Have To Suck". Mike Flinn and Eric James are the two main guys behind the scenes doing everything they can to bring Mondays out of the closet with monthly themed events, such as the Pajama Party and, most recently, the Luau. They said that their theme nights are always a huge hit, drawing sometime 300-400 people to The Empire Room.

But what about the other Mondays? Well, you can BLO every Monday night at The Empire Room with Glenn Jefferson aka DJ Two Heavy, spinning up some of the best old and new favorites from all dance genres. He even plays some of the more obscure things that are sometimes only heard at more underground events. Everyone seems to love what he plays every Monday and as a result, regular BLO Mondays still draw an excellent crowd.

The cover is still $5 every Monday night, but it is a small price to pay when you consider the $1 drinks and fantastic diversity in people that you will find there. I have never been to a club in Kansas City where the level of social acceptance could match some of my other more favorite clubs around the United States. White, Black, Brown, Tan, Purple, Green, Yellow, Gay, Lesbian, Cowboy, Junglist, HipHopster, Raver, GothKid, ClubKid, etc... All are welcome. All have a good time. All drop their social pretenses upon entering the doors. It really is a good thing to see happen here in Kansas City. I hope that it continues for a very very long time. As one of my favorite Junglists, cQuence, so eloquently put it last Monday, near the end of BLO: The Luau, "This is definitely the best Monday night ever in Kansas City." 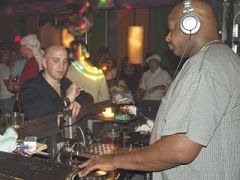 Not only that, Mike Flinn hinted to me that this $5 isn't being squandered, but is being saved up so that they will have enough money to bring in some well known regional, national and international talent to spice things up even more in the very near future. Until that time comes though, Glenn Jefferson isn't missing a beat or an opportunity and is already bringing in random local talent to tag with him on this night, such as DJ Maxx, RJ Bass, Steve Thorell, Bill Pile and Pat Nice, just to name a few.

Needless to say, come on down to the Empire Room some Monday night and just see what happens, or get in touch with them to find out when the next theme night is. You will not be disappointed. They even take the time to decorate for whatever theme is in place for the evening.

To sneak a peek at what you may have missed, just have a look at the photo gallery, under Kansas City and look for BLO.
zine.v1.stories