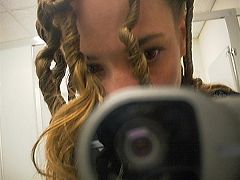 Stacey East ~ Interview with Heather Heart ~ Heather Heart and I sat down for coffee. It was almost 4:20 and we began the interview. I was looking at a publisher, DJ, record store owner, label owner, producer, and mom. This small dynamo created the first static global forum for the underground to meet, through the only underground manual "UnderOneSky" or "UOS."

"I put my entire being into the music to educate and give voice. Publishing grainy interviews from Underground Resistance to letters from Moby, UOS was the only "zine" of its kind. There was always some rage, people were very candid with me and I printed a lot of controversial letters. Record labels, DJ's and fans alike would battle on the pages of UOS. All the important record stores in England, Germany, Austria, Finland, Sweden, Holland, to name some, sold copies. The world was behind my effort. I mean this was when the scene first blossomed, just before all the politics came into play. When I interviewed "UR" in ' 91, it was so raw…" this was before Jeff Mills left UR, when Rob Hood used to MC for them. At some of the first parties there were many young DJ's such as Woody Mc Bride, Barada and Kurt from Drop Bass who would drive from as far as Wisconsin to attend Storm Raves and relied on UOS for record listings. I was every department, I was graphics, sales, advertising and printing, at first I wasn't making any money at all. I was doing it because there were people that would ride a motorcycle in the rain from New Hampshire to Brooklyn who couldn't live without it - New Hampshire later developed a very nice scene.

As a DJ Heather Heart traveled the world in the early 90s, she recalled a party in London "climbing up a wrought iron ladder to the rooftops. The promoters were from India and had grown up in ashrams. The feel of the party was extraordinary - people were dancing on the roof and on the roofs surrounding us." Fascinated, I asked her about some of her other experiences abroad.

"In Germany, at Tresor, I had a great time. It's an incredible venue, an old bank. We were all hanging out in the hotel (all of whom shall remain nameless) and one of the DJ's had passed out in the room. They dressed him up in makeup and girls clothes, fishnets and everything, it was so funny when Blake Baxter walked in and said 'oh ! I must be in the wrong room' and walked out.

"The most incredible gig I ever played was Sativae in Scotland. It was the sickest crowd I ever played to, they were totally mental. The vibe just hung over the room, I mean you could see it and every once in a while they were screaming 'Revolution!' It was hot! In Austria, there were 13,000 people there - the DJ booth was 6 stories up in the air. There were video screens because no one could see the DJ's from the ground floor. There was a stage with fire throwers and MC's, announcing each DJ. Adam Beyer was supposed to go on but was caught in traffic, and so they gave me his time slot. When I went on they announced me as Adam Beyer. I was so pissed!"

"I've played in so many different places, from the boondocks of
Wisconsin to the beaches of Hawaii ( I wanted to stay there and buy an ice-cream truck ). I've played at a racetrack, an ancient wine cellar, a supermarket…"

I could see the worldliness in her face, it was evident that all her travels were a great influence on her success. She was definitely someone who was well versed in the music.

"I had worked for distributors from '93 – '95 so when the time came to open Sonic Groove with Frankie Bones and Adam X I fell into it naturally. There were very few stores that carried techno, Sonic Groove was the only store dedicated entirely to techno. When we began our mail order department things really took off and people all over the United States relied on us for very difficult to find and rare records. Our database became incredibly specific, if you were to need a discography for Derrick May or Dave Tarrida you could find it in our database."

Heather is such an active participant in the scene, I imagined that the six months or so that she had taken off to have her daughter would have driven her crazy. Actually, I remember seeing her spin a triple tag team with partners Frankie and Adam in Exit NYC at eight months pregnant. It was not a scene easily forgotten – Heather, in a red dress and bulging belly, bopping over the tables, obviously in a groove.

"I was very down about where the scene had gone, but I think it's been better in recent years, people are more into the music again. I definitely have a renewed enthusiasm. When we played Seattle for the Sonic Groove CD release tour "Defined" on Instinct Records, the party was really quality - big and vibey, Bones and I did an awesome tag team set and the crowd was totally into it. It was my first time playing in Seattle. Actually the whole tour went very well considering it took place right after 9/11 in October / November ' 01."

Heather is an underground superstar, I'd have been remiss not to ask her about "Better Living Through Circuitry" which I caught on Showtime one day at 3:00 in the afternoon. Imagine my surprise, flipping through channels and suddenly I see Heather Heart - "It was really quality music then, it's so diluted now – I mean there are 100 new records every week" she's saying outside her store on record row in the west village.

"Better Living Through Circuitry was fun to do. I got to express my views on the scene and I got a lot of positive feedback, also they used a track I did with Adam as part of the film's soundtrack. I've heard that we (Sonic Groove) were mentioned in the directors cut, but I haven't seen that myself." 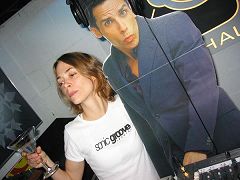 I am again struck, this time by how much this little dynamo has to be proud of.

"We were really excited about playing the DEMF (Detroit Electronic Music Festival) … in the city where it all started, and I'm so proud that the board chose us."

What else from this 5' powerhouse?

"I am relocating to San Francisco and I'm very much looking forward to playing more on the west coast, as well as having a big new space to put together my studio!"

For more information, visit her MySpace or just go to EastMusicGroup.co
zine.v1.stories