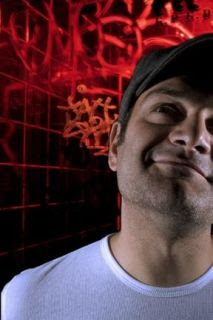 So I read that you were born in Iran, what originally brought you to the states?

I moved to the U.S. when I was 12 with my family. We came here because of political turmoil in Iran.

What got you into spinning records?

Ever since the age of 16 I was going dancing at a club here in Chicago called Medusa's. Essentially what got me into spinning was my love for dancing. In 1990, my freshmen year in college, I got a chance to mess around with some turntables and a mixer. We were at my girlfriend's house around Christmas time. Her brother had pulled out his old DJ gear and by the time we left their house I ended up commandeering the entire set up. Getting behind the decks was more or less an accident. If my ex's brother hadn't pulled out those decks on that day who knows what I'd be doing now.

Can you play any instruments?

I play the guitar and my keyboards badly.

Whats the difference between the crowds of all the different places you've played like Chicago, Paris, Ibiza, Tokyo and so on?

It would take a book to answer that question. Their differences are overshadowed for me by their similarities. Before the set and afterwards everyone can potentially be very different. But while I'm playing music people basically fall into two catagories. Those who get the music and those who don't. I find that those two catagories can exist anywhere.

How do you feel about all the animosity from those who spin on cds and those on vinyl?

Thankfully, I don't hear much of it anymore and it's a stupid debate. Music should be the topic of discussion, not whether it's playing from a CD, a record or futuristic nano cube.

DJ's who put the music above their own ego. The last few sets I enjoyed we're played by Loco Dice, Josh Wink, David Duriez and my roomate Kyle Szmurlo.

What inspired you to produce your own tracks?

"Move Any Mountain" by The Shamen. I remember they had a remix contest for that song making all the parts available on one of the vinyl pressings. Right around that time I was working on accompanying a producer friend of mine with some beats and effects while performing live. We decided to take a crack at the contest. During the process I started to wrap my head around drum machines and sequencing. Our remix sucked but it got me fired up to learn more.

Do you have any favorites?

I've read that your sets have a "journey style" way to them. What is that, exactly?

I like to go between genres, styles and tempos to create a dynamic set of music that reflects the communication between the audience and me. The most important thing for me about DJ'ing is this impromptu creation of atmosphere that is unique each time. I like to build up a crowd but I think just getting harder and harder is plain boring. Too many DJ's treat their audience like halfwits. When I'm on the floor dancing I like a DJ that can play with my emotions and I try to do the same when behind the decks.

Do you have anything special planned for your show here in Kansas City?

Well right now I've just started working on my next Audio Soul Project album due to be released in April of next year. I have a couple of the tracks near completion and KC will be the first place where I'll be testing them out.

Do you have any advice for any beginning dj's out there?

Don't start your own label. It's pretty much the mold to start as a DJ and then 3 months later become a producer and then 2 months later after everyone has turned down your demo start your own digital label on Beatport. This lack of quality control is choking our scene. I think it's temporary though. The people who truely invest in their music, time being the most precious thing they can give, will succeed and those looking for short cuts will eventually get bored and becoming accountants like they were always meant to be. I guess my advice is to do it for the music and the music alone. For even more on Mazi, visit TCA-Web.com, GourmetRecordings.com or Mazi on MySpace!