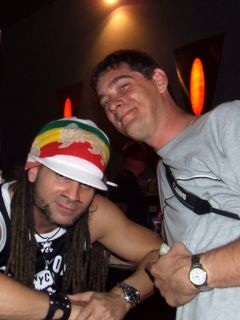 For the cover this month, I dipped back into the archives for a shot that I got of John Kelley over three years ago at Chaos Theory. Of course, I had to play with it a little in Photoshop because it really wasn't all that fabulous. It really wasn't all that clear either, but it was the best I had and it actually turned out interesting enough.

I really am looking forward to his return next week as I know many others are too! An event that also heralds another birthday for me, it has been entirely too long since he was in Kansas City. As well, it had been for Monk, pictured here with me. Aaron grabbed this shot at the end of the night last month, while we stopped to talk for a minute and caught our breath after his fantastic performance which kept people dancing for hours!


Elsewhere in Kansas City this month, Kyle Pound made a special appearance to a disappointingly thin crowd, much the same as it was for big-name DJ Steve Porter just last week at the Voodoo Lounge. Even in San Francisco, Mike noted extremely sparse attendance in the House music room of Club Hide. It does appear that with diminished attendance at many other House music events around the country, the time is definitely ripe for, and dancers are making a statement that they want something a little more unique than the same old 4/4.

Ready, waiting and gaining attendance at every event that happens for them, Breakbeats and Drum & Bass are standing up to the challenge. With striking similarities to much of the mainstream music available now, it's no surprise either. Modeled on these mostly underground genres are some of the most popular hits in the world. From HipHop to Rock, their roots almost always find their way back to the broken beat.

I suppose you could say this is much of the reason we decided to go in the direction we did with our series of concert events at the Grand Emporium. We thought we should offer an alternative, a different beat to dance to that at the same time is more familiar, more comfortable and ultimately... more fun.

Overall, I cannot think of anyone better than John Kelley to bring you that sound! He is just the man to get you moving! Check out the story on him in this month's issue, especially the links and his MySpace page. Personally, I am totally hooked on the Funkasaurus track. I can't wait to see him throw that out there live next Friday!
zine.v1.stories