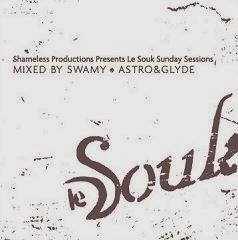 story by Betty Kang ~ New York City - Sunday night, while most folks are winding down their weekend, Sunday Sessions founder Swamy and resident DJs Astro&Glyde are marshalling a packed house of full-throttle party people on a 14-hour odyssey of funk-filled beats. Le Souk Sunday Sessions is the soundtrack for the energetic and non-stop house music bacchanal that keeps the weekend going into Monday morning in New York’s East Village. This double disc set captures the two sides of the Le Souk Sunday Sessions that have made Le Souk a legendary global party destination: the sun-kissed sexiness on the by day (Swamy) and the down ‘n dirty grooves by night (Astro&Glyde)!

Seen from the street, the unassuming North African lounge/restaurant just looks like another East Village eatery; but inside, through the hookah-smoke filled passages, is a path to a different world. Sunday Sessions was born in the tiny sun-drenched lawn in the back of the restaurant, and the first parties immediately intimated images of the white island paradise of Ibiza. As the legends of the endless weekend spread and the party built up over the years, the owners of Le Souk met the demand of clubbers by building … down? Excavating 20ft down into the back patio, the party literally went underground. Now in its 4th year, with a newly expanded patio terrace, the Le Souk Sunday Sessions continues the journey.

There’s an upfront energy and twisted journey you take at Le Souk where the DJs understand what it takes inspire a crowd and to keep the party going long after the weekend should technically be over. In the city that never sleeps, this is the weekend that never ends. It’s the latest incarnation in New York City’s tradition of outrageous parties, underground clubbing and hedonistic dance music. There’s no other place in America that brings together such diversity and experiences. In generations past there was Studio 54, Paradise Garage and The Loft, then Limelight’s heady club kid days that led into the DJ-centric era of Twilo and the explosion of DJ culture. Le Souk invokes all these memories with it’s full-throttle free-for-all party aesthetic and attitude.

Let the Le Souk Sunday Sessions be your souvenir soundtrack for the summer and your passport to the party that never ends.

Le Souk Sunday Sessions are coming to a city near you…

Swamy founded Shameless Productions in 2001 and since then he has created some of New York’s finest underground parties, and transformed unassuming venues into house music havens. Whether it be Habit-at Saturdays at Sullivan Room, Table 50 Tuesdays, his monthly residency at Crobar or Le Souk Sunday Sessions, his parties are notorious for their amazing energy, tremendous DJ talent and of course cool, hip New York scenesters. Look out for him as he continues to deliver at his new club, Movida, where you’ll find him ripping up the dancefloors. Check 'em out at movidanyc.com

Dynamic New York DJ/production duo Astro&Glyde, also known as James Bem and Gaby Dershin have been rocking dancefloors for 10 years. Known for their upfront, dirty New York house sound and their ability to keep a party going for days, their work in the studio has also become a force to be reckoned with, with releases on labels such as Bedrock, Inevitable, SLR, and Fire. Astro&Glyde: no matter where or when, they never forget that it is a PARTY, and they always come to ROCK! Check them out at AstroGlyde.com