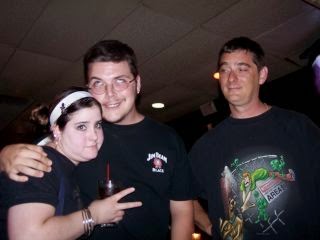 This is a pretty full issue. We have been all over the place finding new and interesting things. I still wonder sometimes how we manage to get to all of the places that we do.

As always, there's a little something for everyone inside. We've brought a few more writers in and are bringing more people in all the time to help make this Zine even better. Before you jump in to your reading, drop by the On Decks column. Our Trance reviewer has mixed us up a little something for July to keep us groovin down the road.

The cover this month, goes to Sarah Bates again with her story Kansas City - Alive with Pride in '05. The photo was taken at Kansas City's Liberty Memorial Mall, where the celebration was held. It looked to be a pretty good time. We were definitely happy to have been a part of it.

I honestly don't remember who took the photo that I'm using in this column for this month. It might have been Sherri. Either way, it was taken at Balanca's, while we were hangin out with some Tuesday night House Music by DJ True. Stephanie looks a little concerned over that face Joe's makin. I think this might just be his "evil monkey" face and she is right to be concerned.

This was the month for George Acosta apparently. It seemed that everywhere I went, there he was. I saw him perform three times this past month. It was just last week, he played the Uptown here in Kansas City, to a rather sparse crowd. That was definitely not the case at the Lizard Lounge in Dallas though. I think they told me that they had nearly 1000 through the door that night. That is definitely a fun place to party! I can't wait to go back again!

And, it had been just the week before his appearance at the Uptown that I had caught him playing a 5 am set in Murphysboro, IL for Underground Sound: MidWest Freakfest. Unfortunately, we didn't make it out until late Saturday night, but didn't get any less of a party and were treated to some fantastic tunes by a wide variety of DJs on multiple stages. The best stage though... The Cave. If you haven't been to a party out there, go! There's one coming up this month. It's called GeoLogic, featuring PsyTrance and IDM performers from around the MidWest and even as far as Barcelona, Spain. Take a trip out there and spend a weekend partyin. It's good for the soul, especially in mid-July.

Those are just a few of the galleries that kind of tell their own stories, though. Check 'em all out. We've got stuff from Philly, NYC and even Manhattan... KS, that is. I can't wait to see what things we can get into in July! In fact, Shaun and Nate are making a special trip to Canada to bring us a report from there. As one of the Official Media Sponsors for the World Electronic Music Festival, it was a fabulous opportunity to reach out and join hands with those across our northern border.

We really are trying our best to bring you the best in Dance Music and are even getting involved in a few things. Be sure to check out the message forum for information on our latest promotions. We just started the Kabal Guest List Contest and at the end of August, we'll be doing The Beach Club DJ Battle. In between, keep your eyes peeled, because we are definitely planning more things.

Finally... aren't you just about tired of waiting for July 29th to get here? It's been a while since we've had a huge party up in this town, and we're past due. It's almost Chaos time again!


See You on the Dance Floor!