interview by by phelyne ~ photos by bassbinboy ~ Steppa Style is my favorite dj/producer at the moment. I've heard this man play entirely flawless sets live on his radio show on multiple occasions, blending and manipulating everything from old funk records, all the way into the most cutting edge ragga. On top of that, he has so many wonderful tracks and remixes under his belt that I feel I have truly gotten to hear a one of a kind musical skill that is unparallel. This seemed to be a great opportunity to ask him a few questions about his world of music, since a few people have expressed interest in learning more about him. He will be here for a small event I'm throwing in December, called Operation Oldschool. There is a lot to learn about him. He runs an online radio station Movement Radio, that has a very large and dedicated fan base. The station has 24/7 dedicated streams each of jungle, hiphop, and raggae. This man is a professional Chef to boot. You can't get any better than that! So, without further ado, here is what Steppa Style told me during a chat.

First id like to know how music entered your life.

The first time music actually touched me, I was like 6, sitting on the steps outside my bros room, listening to his pink floyd records. Then in Jr. High, I became a drummer and played classic rock style. Kind of like really light punk. More melodic, with a lot of guitar solos and stuff. Like Loli and the Chones, The Cramps Man, and especially Man Or Astro Man. Then freshman year, summer before I went to my first rave, the moment I saw the dj I wanted to do what he was doing. I had no idea what he was doing. I though he was making the music there, not playing records. That is how clueless I was. So I started buying records. Everything from Techno, Hardcore, Trance, House, and Jungle. Actually my first BIG rave was called CIRCA '96. So I met up with a crew called the Integral Gathering. They where a spin off the famous Moontribe group, after they got mainstream. So we would throw these monthly outdoor parties put on in amazing California locations, from the mountain peak to the desert cathedrals of rock. But at the same time, these kids were not offering the style of music my soul craved. It was later that year that I saw the man himself R.A.W. and I knew that jungle was my calling.

So I've heard you play live and you are amazing. Would you consider yourself to be a turntablist? How long did it take to get to you're skill level and at what point did it click for you? 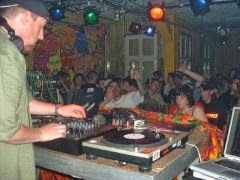 Really, it has just been in the past year, that I have started to bring a strong turntablist element into my sets. Once I heard the Dj Shadow and Cut Chemist Brainfreeze and Product Placement mixes, I knew that more had to be done with jungle. Not just mixing the record, but using the turntables as an instrument. Audio1 was a big player in introducing me to the Masters of the art. I did not like rap when I was in High School. Once I learned to get over it, I accepted all styles of music from Funk, to Soul to RnB. Funk is a MAJOR influence in Drum and Bass and I'm trying to bring that back. Kind of like what Zinc and Hype where doing. People don't know, but all their sample are from classic Funk tracks. I mean, almost every record made from '94 to '98, every drum hit, every sample, was from a Funk song. I'm trying to bring back that element into music.

Sounds like you know about producing tracks. Do you produce?

Of Course. For the past two years, I have really gotten serious. Just started off by doing cheesy remixes, working with others breaks and loops. I have one record I have put out that sold out in 3 months under my own label, Movement Radio Recordings. The record was the Young Bloodz Ep. It was a jungle track but also had a vip and a ragga remix. The vip was Beenie Man and Ms. Thang and the ragga remix feat. Sizzla. The A side was a remix of the Lil Jon original.

So, you've been producing for a while. Tell me more about where you see your future as a producer.

Well, like allot of dj/producers, I see myself in the future working on more of the live element. Having a group of mc's that work with the music I make. Kind of like Cut Chemist and J-5, but bringing in the harder jungle drums with the Funk, Old Skool Hip Hop element. So yea, I see myself DJing my own beats, with live vocalist, in the future.

Do you have any immediate plans to put more of your tracks out?

Expect to see a few records out around the year's end. Keep tuned into www.movementradio.com for all the details.

You came into the scene young. What would you have to say to the people just learning about our culture?

Like everything in life, you need to find out what you like about it. Once you know what you are there for, you are in for life. Find the elements that draw you too it. With me, it is the complexity of the beats that draws me to jungle. And with DJing, just being able to manipulate the sound, real time. Instead of listening to the music, you are involved with how others hear the final product.

I'd also like to bring up the fact that you are a Chef. Would you tell more about that side of you?

Well, music and food have always been competing in my life for what will be my main focus. They both came at the same time and both developed at the same rate. So I took the reality route and decided to get my Chef career off the ground first, cause in the end, that is what pays the bills. Now that I am comfortable with being a Chef, and my skills, I believe it is time to focus on music for a bit. From '99-2002, I was pretty much gone from the scene. When I moved from Southern Cali to Northern Cali, I thought I was the only Junglist, so I kept to myself and focused on becoming a 4 star chef. Now here I am.

Maybe one day you can combine the two. Jungle with Food. That would be wonderful fun. Have you ever thought of doing anything like that?

Well not so much jungle specifically. I think just bringing in the music element as it is, would be a healthy first step. But there have been some ideas. A lot of people have come up to me with ideas of starting a night club/ fine dinning. But one that i've really had, would be a cooking show, with the youth/urban culture showing the new generation of young adults how to cook food that the younger generation would actually want to cook. I would like to bring in the hip hop/ dance hall world music element into it, also.

Sounds like a very nice idea. Hope to see that materialize for you in the near future, and we wish you luck. Thank you for giving us a piece of your mind. See yea on December 17th. To find out more information about Steppa Style, please visit his web site at MovementRadio.com. He plays live every week, so catch one of his sets if you can.
zine.v1.stories