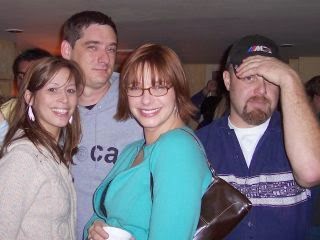 Has anyone else had just about enough of the cold? Ugh... It makes me want to just hide in the house and do nothing! That was not to be this past month thoughl, there were too many cool things going on.

The cover this month is a photo that I took while at The Crystal Method show in Lawrence, just a couple of weeks ago. It was pretty good. The vibe was nice. The dance floor was definitely a mass in motion. It didn't seem to matter that their mixing was off just a bit. I think most everyone that was there had a good time, but the poor mixing was a pretty consistent thought among many.

This column's photo was from a recent outing to The Point, where a ran into a couple of friends and posed for a shot. (What's with the bill there FitzRoger? It's a flash. It won't blow your hat off... lol) I really don't know how they do it, but I don't think I've ever seen a bad night there. DJ Steve Thorell & DJ billpile have also picked up a new Wednesday night called "Boutique Wednesdays" at the Grand Emporium. They are open until 3 am, so when you're done getting your weekly Cup at Wednesday Perk, be sure to drop by for a little House.

Speaking of new nights, I ran into DJ Paul Wicked last week at his new Saturday night, called "Noches Calientes" at bar Ibiza. If you like the coziness of The Point on Friday, you'll dig this place for your Saturday night outing in Kansas City. They are only open until 130 am, but you can still drop by and get your legs warmed up for whatever your dance destination is.

Vital opened in Kansas City as well. Formerly, Club One 51, they've got a new name, and new attitude, new lazers (wow!) and new sound. With a capacity of 1500+, they definitely have the potential to become Kansas City's new Super-Club. It would sure be great if Kansas City, KS suddenly decided to adopt a more Chicago like attitude about clubs. If that place could stay open until 5 am, there would be no stopping KCK from becoming the new place to party! For now they'll just have to work with the 2 am deal.

There's always the after-hours though, eh? I hear there's things on the horizon, so even though the party scene this month was a little slim, never fear kidz! I'm quite sure that the coming months should prove quite interesting, but you may have to do a little traveling. I wonder if they are planning on doing Stardust 5... hmmm... I'll have to check on that. :)

Finally, musically speaking, my pick of the month would have to go to Tortured Soul who played recently at Kabal Restaurant & Nightclub. I took a couple of friends of mine with me that I knew liked House music and would appreciate this particular performance. I was more than right. When it comes to House, these guys know how to please. I know a certain Monkey that is so picky about her House music who really loved it. And you know, if she liked it, it had to have been good.

Oh Yea... speaking of House music... hehe... shall I plug my 3rd anniversary party one more time, or no? Yea... December 11, 2004. Read the main article this month. It will tell you everything that you need to know and a little more.

see you on the dance floor