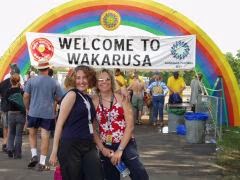 by BPositive  ~ photos by todd ~ What do you get when you mix thousands of hippies and hippie-wannabes with tents, beer and loud music? If you were at the first Wakarusa Music and Camping Festival, July 17-20 in Lawrence, Kansas, you got a lot of fun, some unparalleled people watching, a good tan and plenty of exercise and relaxation. Sounds like a recipe for the perfect way to spend a weekend, and indeed it proved to be for myself and couple friends I talked into going along.

I had caught wind of the Wakarusa Festival several months before the actual event. It sounded like fun, but as someone who has listened to almost nothing but electronic music since 1990, I wasn’t familiar with any of the bands. So, it dropped off my radar screen until I happened to drive by the festival location one night after work. Once I got my first sight of the professional signage, the beautiful facilities at Clinton Lake Park (the venue for the weekend’s festivities) and the large numbers of campers already installed in the campground, I caught Wakarusa fever and there was going to be no keeping me away.

The way I figure it, there’s two main type of people, those who thrive on being around people and those who don’t. Being one of the former, I get goose-bumps at the prospect of dancing in a crowd of happy, jamming people. That’s one of the main things that attracted me to the rave scene and electronic dance music. What’s more, the chance to do it all outdoors on a weekend with a forecast of partly sunny, moderate temps and low humidity had me hooked. As I was to later find out, I was not alone. As many as 10,000 attendees were expected. I don’t think they ever reached that many, but it was hard to tell with people spread out across the huge Clinton Lake park campground and between three large stages. 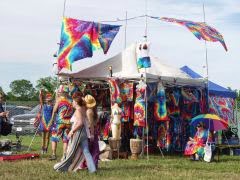 The festival actually started on Thursday night with a single stage. It looked like there were plenty of campers and attendees who had cleared out their lives to spend 4 days out in nature, getting alternately sweaty and wet, while listening to their favorite music. I, however, had to pay the bills on Thursday and Friday, so I figured Saturday and Sunday would give me a strong enough dose of Waka-rockin’.

I came to find out that Wakarusa organizers had selected a wide range of jam bands for the weekend’s entertainment, playing blues-tinged and acoustic, “roots” rock. Names like Leftover Salmon, Galactic, Keller Williams, and Los Lonely Boys may mean more to you than they did to me prior to losing my Jam-Band-Festival virginity.

My friends and I rolled in mid-afternoon on Saturday. Thought the festival had already been in motion since noon, it was off to a slow start that day. Torrential rains and thunderstorms the night before had dampened some campers, if not their enthusiasm. Nevertheless, on this particular day the sun was shining, the beer was flowing and the music from the three stages had me and my friends bobbing our heads as we walked around getting our bearings.

The first thing we discovered was this festival wasn’t having any of that mamby-pamby lite beer. Heck, no! Only real beer with flavor for this crowd of tie-dye-sporting 20-somethings – namely Fat Tire Amber (one of my favorites) and Sunshine Wheat! This discovery generated the first in a long series of high-fives between us as we couldn’t believe our luck at getting to spend our weekend having so much fun. I don’t think there was even any Miller or Bud available on the grounds. But, I am sure no one shed any tears over that! 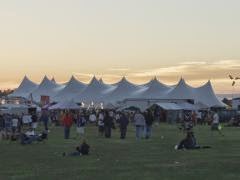 A huge circus tent and stage ensured that the show would go on rain or shine, but mother nature had exhausted herself the night before and so the rest of the weekend smiled on us from start to finish. Two full, concert-sized stages backed up to each other on opposites of huge fields. Clinton Lake park has to be one of the best venues I’ve seen for an outdoor festival of this type. The gently sloping hills and flat expanses of grass were easy on the feet and legs, except for the fairly long walk from the campgrounds.

The superb layout and professionalism in organization of the event were obvious. Everything was surrounded by temporary chain link fencing. All the gates were manned, every comfort and safety feature had been thought of. There were plenty of porta-potties in all the right places. They were relatively clean. The stages were very professional with top-level sound. Everywhere there were signs to guide you. Lots of tables to sit at to enjoy a veggie burrito or a beer. There was even plenty of Red Bull and a coffee vendor in case you were dragging a little after the midnight thunderstorms. This is how a festival should be thrown. There was a lot to be learned from this event’s organizers.

We passed the day checking out an endless stream of local and regional bands, as well as the variety of culinary delights present for a reasonable price (as festivals go) in the vendor area. The festival had attracted an impressive array of 20+ vendors with a good variety of clothing, jewelry and other unique items for sale. Meanwhile the numbers of people at the stages was steadily increasing. 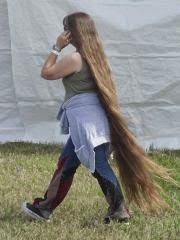 The endless variety in the crowd really made for exquisite people watching. Apparently, there is a large group of former Dead-heads and their younger cousins who follow these festivals around the country. There were plenty of these folks in the house, complete with hacky sacks, dreads and flowing skirts. But, there were also hard rockers, punkers, kids, parents, R-n-B types, hip-hoppers, you name it, it was a colorful crowd. I met people from as far away as Florida and the Dakotas who had driven in for the event, including many from a three-state area surrounding the Lawrence.

About the only group the organizers did not cater to, or attract in very large numbers, were the electronic music crowd. In my opinion, they missed out by not including at least a small stage with electronic music. There’s a lot of cross-over between the jam-band scene and the rave scene. There’s a lot of shared “peace and love” values, similar age group and hey – the goal of both types of music is dancing in the end.

During a set by the Hairy Apes BMX, I suddenly looked up and realized we had finally reached “critical mass.” The area in front of the stage was now packed and people were grinning, bobbing their heads and shaking it as the Apes laid down a blistering set of alternative, jazz-influenced rock. The saxaphone player really took control and gave us what we were looking for.

A surprise golf cart tour of the grounds gave us our first glimpse of the numbers of people in attendance. It looked to me like it could have been as many as 5-6,000 – a hefty figure for this part of the Midwest. Again, the organization underlying everything was highly visible, from the huge Rubber Ducky semi-trucks set up with portable showers in them to the Wakarusa sign-posts making it easy to find your way home again or find that group of friends you met at the last festival. Everywhere you looked there were colorful banners across camp sites and friendly faces. There was a real sense of community that comes from sharing the challenges of nature, be it the weather, the chiggers or the hot sun. We were really sorry that we had left our camping gear at home. 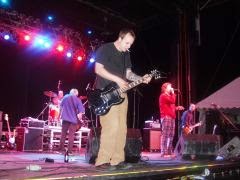 After dark, things really got cooking. The fields which were larger than football fields were filled with people. The front of the stages were packed with people dancing, partying and making new friends. Pomeroy, Particle and the Derek Trucks band all captured our attention and got us dancing.

The real musical highlight of the weekend, however, was the set by O.A.R. (a.k.a. Of a Revolution) on Saturday night. They went on about 11:00 pm and were slated for a one hour and fifteen minute set. But, the crowd was loving it and they must have figured as the last band on that stage, they might as well give the crowd more of what they wanted. Pretty soon they had the crowd singing along in the appropriate places. I liked the catchy tunes and the meaningful lyrics that the lead singer delivered as if he was just one of your friends telling you a story you could really identify with. We decided to skip checking out the other stages and stick with O.A.R to the end. What great performers and great energy from the crowd!

Tickets for this event weren’t cheap. At anywhere from $75 (advance) to $105 (day of) for the weekend, or $50 for a single day, it’s a wonder they got the large turnout they did. I think it just goes to show there is a real interest and market for outdoor concert events like this.


View Photos From This Event
zine.v1.stories