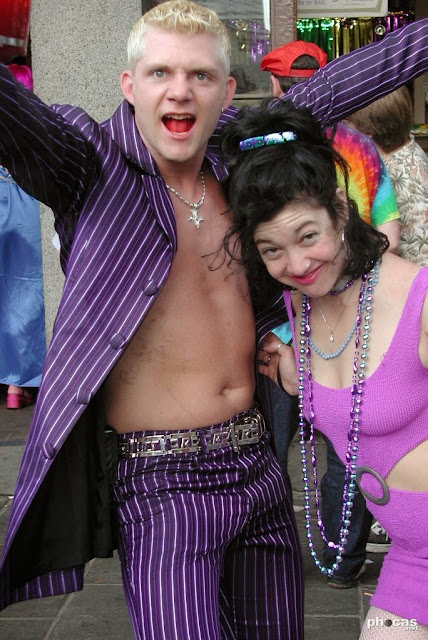 The latest release of photos picks up where I left off in my last post.  We returned to Mardi Gras 2001, and were equally amazed at the controlled chaos New Orleans descended into.

We arrived early enough to catch a friend’s performance at Checkpoint on Lundi Gras, and met some interesting folks from Slovakia.  They had arrived looking for a place to stay, on their way west to get married in Las Vegas.

There is no such thing in the days leading up to Mardi Gras.  If you didn’t book it a year ago, you’re on the street.  They were not.  They were invited to stay with us, and we began a long friendship across the globe.

Mardi Gras Day found us all over the French Quarter, later returning again to the street-stage of improvisational music in the Marigny, to dance the night away.  It was a fantastic day of photos that covered nearly every aspect of the Mardi Gras in and around the French Quarter.

Returning later in the year for an off-season visit, I discovered it was never really off-season.  The weekend I chose turned out to be that of Southern Decadence.  That could not be a better title for what was witnessed over that particular weekend.  Indeed, we were privileged enough to obtain a balcony view as events unfolded on the streets on the final night.

Chaos reigned again on Bourbon Street, in not too different a fashion than it had on Mardi Gras.  I did not take quite as many photos that day, being short on battery power and memory, and the film camera that I had with me was for other purposes.

The people, the atmosphere, the happenings all came together to form a story.  photo-documenting these events as they unfolded was a rare opportunity.  The large scale events were already being done a hundred times over though; their story was already being told.  I want to tell the story of a different world of events and it came to me through a steady pulse of bass, from down the street.

The last night of Southern Decadence, without a camera, my comrades and I stumbled into a dance club sometime around 2 am.  The DJ was spinning some soulful Deep House, and everyone was on their feet moving to music.  We were lost for hours there, and with the dawn, came a new light.
backstory