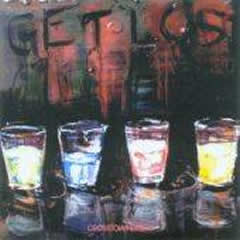 Get Lost is a deep and tripped out fusion of mighty mastercuts, techno toys and special songs carefully excavated from the electronic underground. Featuring exclusive new Rebel releases from Mlle Caro, Naum, Ost & Kjex and DJ Koze, Get Lost offers up new angles and fresh experiences for both the mind and the dancefloor. Disc 1 is a wonderfully twisted mix for the dancefloor while CD2 spreads its wonky wings even wider… Lazarus and Styles mixed both CDs together having spent the best part of six months combing the underground and compiling its awesome 29 tracks.

The incredible painted artwork for the double album has been created by LA based artist, Natalia Fabia. Glasses filled with luminous liquids, ladies holding weasels and octopus haircuts are just some of the weird and wonderful images to be found on the booklet and sleeves to the accompanying soundtrack.

This is the first mix album from Damian Lazarus in 2006. Since last year's ‘Rebel Futurism’, and Bugged Out ‘Suck My Deck’ compilation releases, he has extensively toured North and South America, Australia and Japan and is continually building a firm following of underground techno supporters and discerning electronic music aficianados across Europe and beyond. Following his ‘Time Out – Other Side of London’ compilation in Fall 2005, Damian currently hosts a residency at the Stink parties with Kompakt owner & A&R head Michael Mayer at T Bar in London and will once again hold fort at Ibiza's infamous DC-10 club this summer.

As label manager at Crosstown Rebels, Matthew Styles has up till now been the secret weapon in the Rebels DJ team armory. After receiving critical acclaim for the See You @ The Party CD on Music For Freaks, Matthew has created a buzz and a great deal of love for his exceptional DJ sets at some of the world's coolest clubs, particularly the Panorama Bar and WMF in Berlin, Pulp in Paris and Fabric in London. Matthew is a DJ and producer on the rise.

Crosstown Rebels reached a milestone in 2005 with the label’s first artist album with Chilean artist Pier Bucci ‘Familia’. The album’s South American melodies juxtaposed against the intricate electronic micro-house leanings and minimal techno excursions are at once trippy and beautiful and continue the cutting edge path of emotive electronic music.