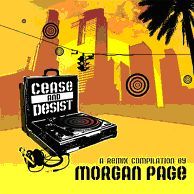 Each mix takes the original in a new direction: melting genres and blurring the lines between mainstream and underground appeal. From Coldplay’s funk laden "White Shadows," to the epic strings of Antone Dvorak’s "Symphony #9" Cease And Desist is bound to change a few minds about electronic music and garner a few friendly lawsuits in the process. A technically skilled producer / remixer, all of the album was produced using Pro-Tools in his studio in Silver Lake, Los Angeles with only one of the split tracks provided!

In 1999, Morgan Page was working in college radio and remixed "Angels" by Wax Poetic feat. Norah Jones, using the acapella from the 12" single. The band (including Norah herself) loved the mix and it was passed around Atlantic Records' offices. Morgan began creating more of these unauthorized mixes adding his own style by layering live bass and guitar to add a warmer sound to the mixes. Soon, he began to receive a tremendous reaction to the mixes from radio DJs, club DJs, and music supervisors (Morgan’s tracks have been featured in national campaigns from top retailers including Adidas, Subterranean, Arden B, Nike, Chanel, and Nine West.) To date, Morgan’s tracks have been supported by many superstar DJs including Sasha, Deep Dish, Danny Tenaglia, Dave Seaman, Hernan Cattaneo, John Digweed, Mark Farina, Jason Bentley and Roger Sanchez. In fact, his track "Landline" was recently signed to James Zabiela and Paul Sidoli's Hearing Aid Records.

Now, at age 24 with several remixes under his belt and dozens of critically acclaimed EPs out on labels like Bedrock, SAW, and Nordic Trax featuring collaborations with Colette, Gregory Shiff, and Astrid Suryanto - Morgan has established himself as a profound producer and highly sought-after remixer.