middle of know where

story & photos by Sarah Bates ~ By Friday afternoon I was so ready to leave town I couldn’t even sit still. I counted down the hours in my cubical until it was finally time to hit the road. My boyfriend and I loaded up the car with all our new camping gear, lots of food and beverages and finally we were watching the city fade in the rear view mirror.

While the flyer for the party said Omaha, Nebraska, it was actually about an hour outside of Omaha, a good four hour drive from home. With my love for outdoor parties, and it being the first outdoor of the summer, it was well worth the drive. I was looking forward to a three day weekend of lounging in the sun, hanging out with some party kids, and taking in some dope beats.

We got lost, but thanks to some interesting locals we eventually found the place. The name "Knowwhere" suited the venue well. The party was held on a good chunk of land in the middle of rural Nebraska, and about 6 miles out on a gravel road. The place had a really awesome set up for this type of party. There was only one entrance, the roads are easy to drive on, the land was level and there was plenty of space for parking, camping, running around in circles or whatever else you really felt like doing.

At the entrance to the driveway we got our wristbands, which are by far the funniest wristbands I’ve ever seen. They said “Lose this, and you better Knowwhere to find $10!”

We set up our tent with the already pretty large group of KC kids. I must say, the party kids from Kansas City definitely represented at this party, and they partied like pros. They didn’t even think about letting anyone else camping around them sleep ALL weekend long, saying, "Sleep? You can sleep when you’re dead!”

Friday night was open decks night with only one stage open. Those who brought their records and got their early enough to sign up, got an hour long slot to show off their skills. I didn’t get to catch everyone who played, but there seems to be a love for Hard House in the Nebraska scene. We crashed out early Friday, but didn’t sleep long. Everyone was up bright and early in the morning, grilling their breakfast hotdogs.

Since we arrived after dark, Saturday morning I explored the land where the event was being held. To the left of the house was a wooded area where the camping was set up, and cars were parked. To the right of the house was a good sized garage where the open decks were Friday night and the Jungle/ Drum n Bass room was set up Saturday night. In front of the garage was an area where there was a large bonfire and down the hill was the main stage for Saturday night. 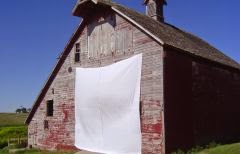 Saturday I had a chance to talk with the people that helped make the party happen. The first person I met was Kidd (Pirate Transmissions), who is by far one of the most energetic people I have ever met. He is tremendously talented and has done the visuals for the Chaos Theory parties in Kansas City. He makes all of his stuff himself, including two massive homemade screens he sewed together himself out of 4 king size bed sheets, that he had rigged up to the barn and silos outside.

That afternoon I lounged in the grass and talked with Danny Maze, the creator and promoter of the event. The party itself was held at his home, where he and his beautiful girlfriend Abrey dwell. Danny is originally from Tampa, FL where he worked for Groove magazine. He has been spinning Hard House, NRG, and Breaks for 12 years, and promoting parties in many cities including LA, Tampa, San Bernardino, and San Diego for 10 years.

The event was put together with no sponsors; just himself and a few of his friends organized, paid for and ran the event. He wanted to make sure that props were given to those who made the party happen. First, Matt-E, a Hard House DJ from Omaha. Second, Dustin, also from HighLucyNation Productions in Omaha. He puts together the weekly event in Lincoln, Nebraska called Chatterbox, and Danny said that they were very helpful in supporting the party.

Danny and I, along with Matt-E and some local Nebraska party kids, discussed the Nebraska scene. Danny’s thought was that this event was “100% the trial/error for the scene in Nebraska”. It was agreed by all that the main problem, like in most places, is lack of support. Maze also added in that there is talent here, and there are enough people to support a scene, people just need to take the initiative. All of them hope that the scene there will be rejuvenated soon.

As dusk fell, everyone was getting prepared for the party to come. More and more people were showing up, the party had doubled by nightfall. While waiting for Milo to cook us some yummy grilled cuisine, I got to talk with one of the headliners, Paul Anthony from Chicago. He is with Ammo Recordings, Kontrast Recordings and Dirty Fabric. We talked about his current projects and his feelings on the scene in the Midwest.

“The Midwest is coming back large. Lots of new faces” Paul says. “The Midwest has a lot of people who are into House. It’s a good scene, and the kids are more appreciative than in larger cities. They don’t take it for granted.” 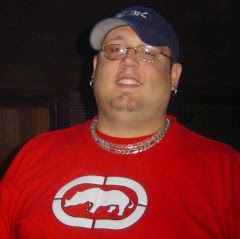 He had too many upcoming projects and record releases to discuss. Some of the more prominent ones are “Get a Move On” (611 records), which was was recently released and is being played by such artist as Bad Boy Bill, and CZR. Also, “Call to the Wild” and “Got the Groove” are being released on Kontrast Recordings, and “Everybody Dance” on Ammo Recordings.

I asked Paul if he preferred smaller parties, like this one, or larger parties. He said that there were good sides to both. He likes smaller parties, because they are more intimate, and you can really connect with people, and meet people. He likes bigger parties because “It’s a chance to reach a large number of people at once, and there is a high amount of energy in larger crowds.”

Shortly after I got done talking with Paul, the party was getting into full swing. From about 7 until midnight Nebraska locals played on both stages to a growing number of party-goers. There were way too many to name each, but all of them were on the top of their game and played well and with tons of energy.

By the time Paul Anthony and Mark Almaria (also from Chicago, on Ammo Recordings) took the stage for their two hour set on 4 turntables, everyone was ready to dance. Paul and Mark tore it up for two hours straight. The whole spectacle of the bonfires, all the kids dressed up and dancing, surrounded by Kidd’s beautiful visuals was awesome to experience.

Besides a minor interruption by the local authorities, which shut down the main stage early, I thought the party was a success. Talking with Danny later, the authorities asking for the main stage to be shut down was actually a blessing in disguise. About 20 minutes after all the sound equipment was loaded back into the truck, a storm came out of nowhere (no pun intended), and soaked everything. The music in the Jungle room continued, safely covered from the rain, well into the morning.

All and all, I think everyone who attended this event had a good time. It was definitely a fun way to usher in the summer. When I asked a very tired Danny Maze about any future plans for parties at his place he just said “Next time” and smiled.

You can see more the photos from what you missed by checking out the gallery Be sure to keep up with any of Danny's future events by visiting his website at DJDannyMaze.com.