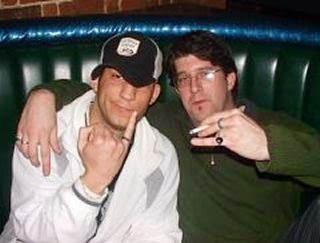 interview by senseone ~ photo by lorri auer ~ Right in between Kansas City and St. Louis lies a little college town called Columbia, and if you ever find yourself there, you also might be looking for something other than your average college bar. This month, I took a minute to speak with my good friend, Kevin Mc. Gee, also known as Kevo. Kevo runs two nights in Columbia, one that has been going for 2 years now, at club Shattered, and has also another night now, at the Sapphire Lounge. Kevo, along with DJ Bernard Jones and Jim McKibben (aka Johnny5) also run Midwestmassive.com, a web site dedicated to bridging that gap between the cities and connecting the scene there in general.

How long have you been involved in the Columbia scene, and when did you get involved with Shattered?

Well I've starting getting into electronic music around 97 but didn’t really dive into until 2001 or so. Before then I was more like a bystander (sp) watching DJ's at numerous house parties around that time. Shattered was the one bar I found to be quite comfortable at when I first started going out downtown...it was full of diversity. Back in the late 90's I started hanging some of my artwork down there and continued to have a rotating display of pieces till shattered move to its new location on Broadway (where pure lounge was located). I DJ'd a SWING big band night at the old one on Mondays before it closed. That was a total flop... using cd's mind you, not mixing. That would probably be my first official shattered involvement.

Later on, the torch was passed to me, DJ Bernard Jones and Jim Mckibben to run the electronic dance night "THE VIBE" around AUG 2003. We decided on the name midwestmassive to represent the ideal scene that we should all have, a collective, getting everyone together. Our efforts are to bring in DJ’s from all over the Midwest to share their music to network and expand. We are all doing the same thing here, why don’t we help each other do it, you know? It shouldn’t be that hard. I personally never thought we would have done the shows we have and feel very fortunate to be able to book such talented DJ’s.

You've had plenty of headliner quality DJ's play down there, which was the most impressive? Who could you not believe you were able to book at the end of the night?

As far as big name DJ’s?? Don Tinsley has always been a favorite of mine. The guy is just soooo humble and has such amazing talent. Kid Icarus was an awesome guy to work with; I think all DJ’s should take note. I'm just talking about quality DJ’s here NOT big named supa stars. As far as bigger names go, I’ve got Paul Anthony coming up i'm sure my jaw will be on the floor all night for that one.....and soon after Simply Jeff.

In general I'm just very humble and appreciative to be able to book DJ’s and try to be the best I can at it. I've got a venue, u got records... do the math.

And now you have two venues?

Yeah, the massive part of our name sort of comes into play here, as we have added a second DJ night on Thursdays (the other is on Tuesday nights @ shattered) It's funny the location is where this other hole in the wall bar called "The Downunder Bar" used to be...now called the Sapphire Lounge. It's so much nicer...good spot for intimate sets. It gives me more options to book DJ’s, AND more work. It's a fun job (though I don’t get paid for it). I wouldn’t trade it for anything. When it becomes "work" I’m out.

You're also an artist right?

Yeah, that's something I've always done....just part of my DNA, though I've been slacking on it lately. I got a B.A from Columbia College, major in drawing minor in painting. Funny thing is I only paint nowadays. I love color, mixed media stuff.

Do you feel that bringing music to heads is an extension of that?

It's a form of expression in round about way I suppose yes. You've got to open their ears to new sounds. I'm always turning people on to new music I hear, got to pass it on.

What kind of stuff have you been playing these days?

I'm big into tech/house minimal stuff like Bill Patrick from 112CREW.COM, just amazing stuff, but I go thru phases, anything that is good music.

Was it a challenge at first, being that you're in the middle of MO?

It's kind of a convenience because we can draw DJ’s from St.Louis, KC, and Springfield. It is a bit hard to get the people to come due to the day of the week our nights our on, but at least there is something going on. With the DJ’s I’ve met from other cites I hope to help promote them with other DJ’s and promoters around and make them aware of the possibilities.

So what's going on with the site? It used to just be a message board.

Midwestmassive.com was launched in august 2003. Jim is our tech guy and has done tremendous work on updating it and maintaining it. We're currently working on having a through music section up and going (music.midwestmassive.com) where we can host local and regional DJ’s. The site is easier to navigate now. We divided the sections up so you can go to each venue for the dates that are coming up. I usually like to keep about a month or so ahead of schedule. The other features should be up and running soon. I just see a good future the way things are going. More and more events are happening....I feel like the right people are doing things now, and.... DONKEY ROCK!
zine.v1.stories