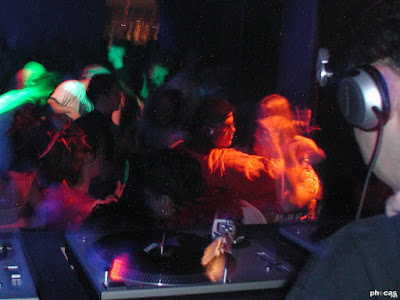 Kabal started to really ramp up in February 2003.  I only photographed a couple of shows there during this month, but the attendance at their Playboy Party said it all.  It was quickly becoming a hot little night spot, surprisingly, on word of mouth alone.  That was intent, according to the owners, who were quickly becoming close friends.  It helped that they were not catering to the typical club crown in Kansas City at the time; at the time, primarily, HipHop or Big Room Progressive or Trance.  House music was the primary attraction, and they were just getting started.  They did feature a couple of nights of HipHop though, just not on the weekend.  Later in the month, I dropped in on one of those nights, put on by Action Jackson Entertainment for the Ladies, featuring local HipHop and Spoken Word performances.  Like Kabal, it started off slow at first, gaining more and more credibility with every new attendee.

I made a couple of trips out to Lawrence in February 2003 again.  It was becoming routine to make at least one journey out that way. The first, a fantastic show at a venue that should have probably seen a lot more shows than it did, Abe & Jake’s Landing.  Hypersonic, a relatively new promotion group was kicking off a new regular Thursday night, this one featuring Kid Icarus.  The main room was a great spot, and the adjacent rooms provided a few more unique sounds. 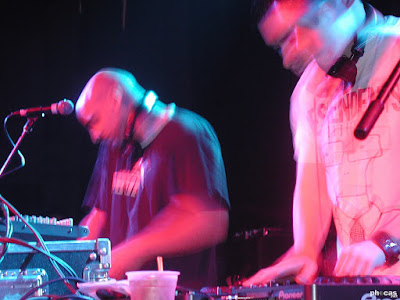 The second, a special Sunday night at the Granada featuring Sound Tribe Sector 9.  It was the first time that I saw them live, and while they put on a good show, with some great music, the opening act overshadowed their performance.  The Live PA act that Ming & FS brought to the stage blew me away, and from the response of the crowd, I was not only one.  The whole room was grooving, and by the end of their set, begging for more.

A few shows of the Gothic/Industrial sort littered the rest of the month.  Mid-month witnessed an intimate performance by Emergence, who played a fierce set to a small group of folks.  A few days later, I dropped in on the Pigface “Easy Listening” CD Release Party, featuring performances from Voodou and Chris Connelly.  There was a second round of the rave-style gone Industrial at the El Torreon on too, with a very special performance by Necrovox.  Of course, as had become a tradition, I returned to Davey’s at the end of the month for a show from the performance troupe Inferno de L’Impur.

Access to photos from these events is not available through the story archive, which is really the only access point for the photos at this time, and where further detail about these events appears.  I am eventually closing down the off-site archive too, but I am bringing back the “collections” in their larger format.  Stay tuned.
backstory