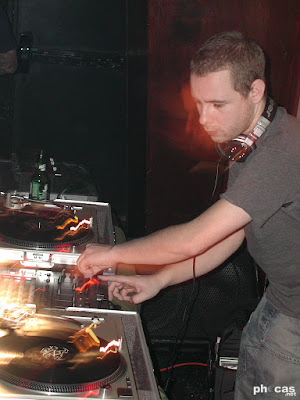 Returning from a nice long Halloween break in New Orleans that lasted the better part of that month, there was not too much going on during the month of November 2002.  There was a House Party nearly every weekend, and really only one event featuring anything beyond local talent.

After playing as the opening act for the Delta Heavy Tour earlier in the year, DJ Hyper was passing back through on his own Bedrock CD/Record Release Tour, and stopped in for night.  While there was not a huge turnout, it was a Wednesday night in Kansas City after all.  Anyone lucky enough to be out got a real treat, and a flashback to the show early in the year.

A completely random event popped into the picture too this month too.  A local high school put on a performance of the infamous "Footloose," and having my camera along, I could not resist snapping a few shots of the show, since it was somewhat of a contrast with the underground music subculture and its sometimes rocky relationship with the community.

In an odd sort of reflection, as mentioned, the House Party dominated the scen during the month.  A small gathering under the banner of Maintenance, by Broklyn Squad Productions went down out south.  DJ cQuence hosted a birthday party for herself and another in the middle of the month, and Phukbed Productions pumped up the volume in MidTown to a full house, at their house.  THe last of the month, 604 Paramore Sessions was likely the best of all though, when 666 ZipCode Town Rekkids hosted a small personal gathering at their place in Topeka.

Those photos have now been restored for November 2002.  There is more to the story for this month, I am sure.  The details escape me at this time, and I have begun to add minor, more specific writings to the events themselves.  When you look through the Story Archive, you might stumble across some of these notes related to the events photographed.  It would be good to hear your thoughts, if you were at any any of these events.  Post a comment here, on the event, or get in touch if you would like to write about something in particular, more in depth... past ... present ... or even future.  Share your experience.
backstory