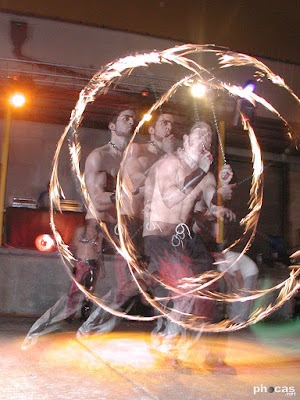 Since last we spoke, I have managed to restore October 2002.  I did not have a chance to say much about August and September when those were posted back to back last month.  They were no less interesting than the previous months.

August kicked off with a new monthly at Balanca's Pyro Room featuring local talent from the Techno Justice League.  There was another House Party, a BBQ and a trip to the Empire Room for a peek in on DJ Mike Scott's night.  A couple of big events went off in Lawrence, courtesy of Project Groove and then a little backstreet boogie to send DJ Booth & DJ Nitro on their way to St Louis. The event of the month was Prodo-1 put on at a dirty little spot on Guinotte by Cosmic Space Entertainment and XL KlubKnights; aside from the DJ talent, the feature of the night being a Live Firedancer performance by Wildfire Entertainment Chicago.

September started with an awesome little Labor Day party at The Empire Room.  A few folks celebrated their birthdays along the way; DJ Sydeburnz of Syde-Sho fame and bPostive, columnist for this site and for a physical street publication of her own that ran before all the interweb business became all the rage.  I dropped in on Wednesday Perk for a little midweek chill session, and there was a Monday back at Club Evos for an event re-titled to "Universal Love Underground."  The highlight of the month was a little gig out at a new spot, the Jackson County Conference Center. DownPlay International and Project Groove brought Shiva to Endless Summer:02. 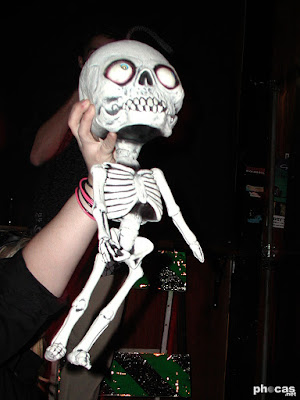 The month ended with the introduction of a new element to the photographic lineup, Submission.  The series is a portrait of a completely different sort of underground lifestyle and performance art within Kansas City over the next two years.  It was a good lead in for October and a month of costumed affairs in honor of Halloween.

A little birthday event in Lawrence got October off to a bangin start, I dropped in on Davey's Uptown for a couple of different Industrial Area band events, their Monday night Evolution and met up with the Dark Diva at her Halloween Party down at Bender's. We dropped in on a Grand Opening event at the Red Room on the Plaza, and later in the week, Jilly's on Broadway for some House music.  Grab Recordings hosted a record release party featuring Tim Harper out of Chicago and Daddy aka Jazmin from Chicago.

Halloween exploded at Phreakz!, which featured Josh "The Funky 1" and Ugly Bill aka Peacemaker.  It was a full on costume rave, back out at the Conference Center.  It was a night to remember, all night long.  Fortunately, it was early enough in the month, since I spent Halloween in New Orleans.  I lucky enough to catch a rare performance by the Creatures of Habit before the city descended too much farther into the chaos of Halloween.  It is not quite so much so as Mardi Gras, but a close third.  While wandering the streets of the French Quarter photographing does not really qualify as an "event."  Halloween in New Orleans is an even unto itself.  The evening included a stop in at an event at the State Palace Theater entitled The Dark Coalition:  The Grand Gala of the Nocturnal By Nature.  I dropped in early to check out Myself, whom I had heard previously and talked to a bit online.  They put on quite a good performance of mixing and live brass.

November 2002 is coming soon.  Search or visit the Story Archive to access photos and/or video of events through October 2002 and 2013 through current.  Stay tuned for future updates.  You can always check the site tag for the latest information on changes to the site, or the backstory tag for previous commentary.

Did you photograph prior to December 2001?  Are you interesting in sharing your photos and thoughts about those times.  Get in touch.  Leave a Reply.  We want your stories...