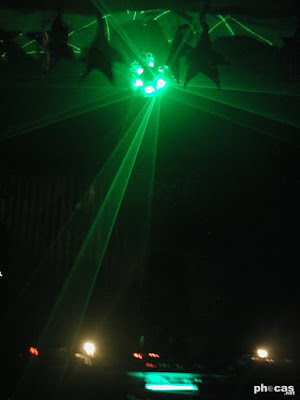 The volume of events really started to ramp up during May of 2002,  and the number of albums steadily increased from this point.  Aside from the usual Monday night at Club Evos, local celebrity DJ Nitro kicked off a Thursday night with DJ Xan Lucero, local XO Nightclub Resident DJ RJ Bass started "Rhythm & Bass" at the The Empire Room that ran for a few years, and a solid Friday kicked off in Lawrence at the Pool Room called Project Groove.  Promotion group C2 Global came out of the blue to through a couple of parties at Club Chemical (Mass & The Pink Party), and KC-Nightlife celebrated a third anniversary at the club and at home.

Three other events challenged the endurance of the scene as a couple of Raves took shape in KC and in Lawrence.  They really didn't follow the standard "Cloak & Dagger" recipe that stories of their predecessors portray, but were a unique towards that, each in their own way.  The first of the month was Midnight Drive, featuring the legendary Frankie Bones with backup from DJs Dan Ostroff, Pat Nice, L*STR and Offtrack.  The second event, Inertia in Lawrence, didn't really go off quite as well, but the music was good all the same. The last event of the month featured some excellent regional talent with DJs Stan Doublin, Danksii, Damon Williams and James Deep at TeePee Junction. Seven other DJs helped to keep the music banging inside and out until sunrise.  Welcome to Paradox.

It was a full month, but there was still time for a stop at the annual Polski Day celebration in Kansas City, KS for the parade and ensuing street party at Frank's Place.  And near the end of the month there was a sweet treat at Davey's Uptown, when Evolution hosted a live fire performance with the artist Veronica the Fire Vixen. That was before the whole Whitesnake incident out in West Warwick, Rhode Island, so burning down the house was still legal.
backstory