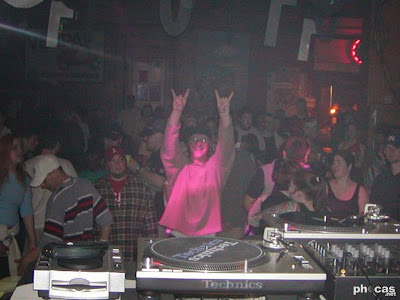 The photo experience began to change, as folks turned towards the camera.  I noticed this, just after returning from Mardi Gras, and it became even more apparent during the month of March.    They smiled. They posed.  They put on a show.  I had started off looking for a more of a fly-on-wall view of an event, but this added a new, more personal dimension to the story line.

March 2002 started off with several hundred descending upon the the El Torreon ballroom and danced the night away to the DeepFix production, Designer History.   It was quite a show, with Mateo Murphy from Montreal and Lance DeSardi, out of LA headlining, with backup from St Louis' Don Tinsley and local Kansas City house legend Pat Nice.  A Drum & Bass room rounded out the selection for the night, hosting Mr. Solve out of Springfield, and locals Ben Fuller, edw!n, Krillin and James Bond.

The following Monday, along with a others throughout the month, found me back down at Evo's,  It was quickly becoming the spot for local underground dance sounds.  Mondays were fun, laid back, and full of appreciation for local talent.  At a couple of other shows on Friday or Saturday, the place was completely off the chain. 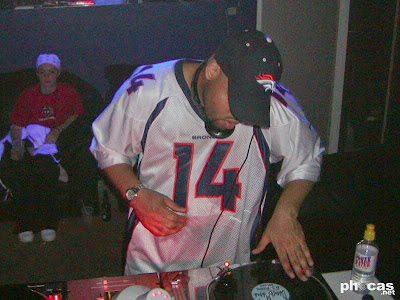 Detroit legend DJ Assault stormed the Club with his own particular brand of Ghetto-Teck aka Booty House, just before St Patrick's Day, and Chicago favorite Mark Almaria made it down to play for the birthday of a close friend. Unfortunately, the later was disrupted by Kansas City's finest.  I don't recall exactly what that was all about.  After poking, dodging a few dancers, and adding to the flashing light display within the club they picked up the door receipts and left.  Puzzling that they would think they were entitled to the door cash, having not contributed to the effort of running the event.

The final show of the month at Evo's was of an entirely different sort, but somewhat the same.  I was invited to come and photograph Euphoria 3, but was warned that it was primarily an Asian crowd.  Was that supposed to make a difference?  It didn't seem to.  I am not sure what that difference would be anyway.  A couple of guys I had heard before, were playing; from New Orleans, DJ Goof, Johnny 5, Special K & Burnz.  The remainder of the line-up was local talent.  It turned out to be quite an intense show, with a packed house that seemed to appear all at once, dancing hard until the last beat.  The photos returned to their essence briefly, with very few posed shots and lots of partying shots. 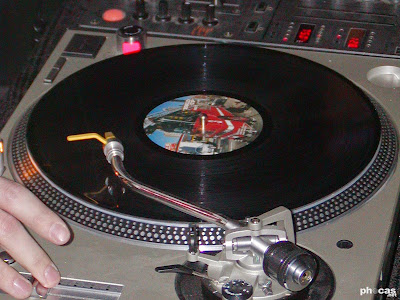 In between these shows, a random variety of angles around town too.  At the start of the month, I stopped in at the Longbranch Steakhouse to take a few photographs of their Mortgage Burning Party, and chilled a bit to some live Jazz at 12 Baltimore.  St. Patrick's Day arrived, and I started at the north end of Grand Avenue and walked south, opposite the flow of the parade route during the Kansas City St Patrick's Day Parade.  It was a fantastic time, but quite a walk. Later on in the month, we toured an out of town friend around the music and cocktails available on a Thursday night at Jilly's on Broadway and the Aqua Lounge in MidTown.
backstory