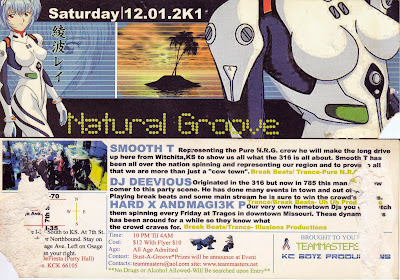 Sometime after returning from New Orleans, I caught a story on a local news station on EDM in Kansas City.  In the typical media fashion, they were building up a new scape-goat, attempting to assert that EDM was the source of all things evil in the city.  Children too young to stand on their own were out dancing all night long, taking drugs, over-dosing, and doing it all over again, night after night.

I knew most of what they were inferring was not true, and was immediately incensed by the ridiculousness of it all.  I had seen the media do this too often in the past, and it fueld my desire to seek out and help to raise awareness that EDM was really no different than much of what had gone before.... kids having a good time, dancing until the break of dawn, for their love of music.  It was their release, and as usual (and as is even more typical now), the establishment was seeking to disrupt and destroy.

I started off traveling around a little to different clubs.  That went nowhere fast, but did discover what was probably one of the hottest HipHop clubs that Kansas City has ever witnessed, Club Life.  I caught a lot of great shows there; indeed, more names than I can remember.  I do recall hearing Tech N9ne somewhere along the way, and perhaps even Mac Lethal.  Memory escapes me though.  It was at one of these shows that the above flyer landed in my hand. It was a bit outside of the norm, so some friends and I tripped down after an evening at the club to have a look.

The event was on the Boulevard in a warehouse.  That was a good start.  Some kids were out front, at a folding table taking cash.  Lights flashed across the darkness of the room inside, beats pounded, and bodies moved in synchronicity.  We were definitely in the right place.

The kids at the door were a bit hesitant to talk, at first.  They probably thought we were cops.  They offered to let us come in and look around, but we really only dropped by to see if the music was right, and see what we could find out about related events.  We talked a bit with them, and peppered them with questions. They turned us on to a local Yahoo Group, KC-Nightlife, and everyone's favorite web site of the time, SyQuil; although, it was already in the process of deprecation.