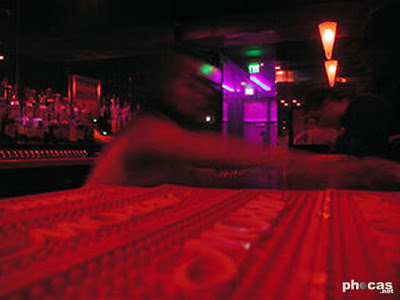 Talking around a bit on the message board, I quickly discovered a new weekly starting up at an old strip club down in the West Bottoms.  A couple of local groups were putting the night together, Stylus Friday, featuring "European & Domestic Trance/Techno" in the main room, and House Lounge in the back room; exactly what I was looking for.  Underground did exist in Kansas City!

Eventually, I talked with DJ FitzRoger, the host of the main room.  He thought the concept photo project I was looking to do was a fantastic idea, and welcomed me to come talk a bit more about in person, and take a few shots.

"The date that will live in infamy" arrived as any typical December 7 in Kansas City, and bombs were about to be dropped, in the form of 5 core years of covering nearly every underground music event in Kansas City, and a bunch beyond.  There was nothing particular special or unique about it.  Actually, thinking about to that, the streets did seem to be a bit more deserted than usual, but that may have had more to do with the location of this first event photographed, "Stylus Friday."

Club Evos was situated at the corner of S St James & Central Avenue, Kansas City, KS.  It lived on the fringe of what at that time was the bombed out, empty shell of the West Bottoms.  Once one of the greatest distribution hubs for cattle and the railroad industry.  In 2001, the area was still a distribution hub for a few companies, but like the boom of the early 1900s though.  To the west of the club, a few random residences, and the Kansas River; to the east of the club lay a graveyard of  short brownstones.  Most were used for warehouse space, or hosted Haunted Houses during October.  Long story short, for most, there was not a lot of reason to go to this part of town on Friday night, and I had my doubts as I pulled up to the club.

Parking and heading towards the door, I was mildly amused to see a couple of hookers come slinking out of the shadows.  Noticing that I was not really out shopping for the evening, they shrank back to whatever activities they had previously been engaged.  Visiting on other occasions, I found they were not the only wild life lurking about either. 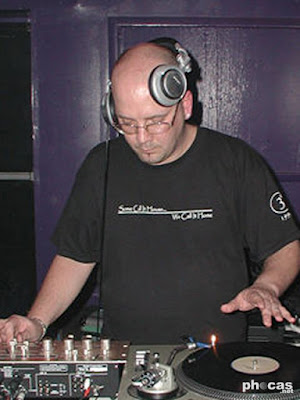 The music was good though, and worth the adventure in to no-man's land.  FitzRoger and I talked about my project idea, the music, what he and others were doing, and all other things going on around town.  Walking about, looking for a few shots, I found the main room to be a bit sterile.  Sound echoed badly off of mirrored walls meant to reflect other desires.  It was a nice large area though.  Leather booths lined brick walls, and all was dark except the dance floor, where strobes flashed on a few random dancers.

The back room was where it was at the though.  Hosted by local record company, DeepFix Records, it promised you wouldn't "hear house like this anywhere else."  I had though, in Boston, New York, New Orleans, and Chicago; however, I had not heard it like this, by these DJs.  Like any other musician trying to make it in Kansas City, there is a special level of determination that seems to always make it in to their music.  This was no different.  They played with a simple and determined passion, bordering on obsession at times.  They were talented, and they were serious, creating art and moving people, with a swipe of their hand, and a flick of their wrist. The dancers were equally as serious, but also playful, about interpreting the beats dropped on them.

The same determination likely caused me to return for Stylus Friday a couple of times that December, snapping a few shots here and there.  I also encountered a similar event held at the same spot on Mondays.  Hosted by EchoBass, it was restricted to the front room.  The music was great.  The DJs playing this brought a different look and feel to House music in Kansas City.  It was a bit less serious, and a little more diverse, including some Latin and Progressive sounds in its mix.  With its cheap drinks and good dance music, Evos would be the place to be for underground sounds, and space to dance. 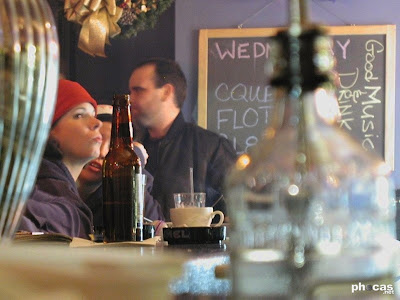 Just after Christmas, another fantastic discovery was made at a little Coffee Shop in the River Market on Delaware.  Hosted by DJs cQuence, flotilla, and sl8r, the Wednesday Perk at The Cup & Saucer quickly became the perfect mid-week spot to witness a more relaxed and experimental performance on the turntables; indeed, the place to be and the place to be seen. It was one of most successful weekly events devoted to turntablism in Kansas City, held in the type of hip and local atmosphere usually only found in places like New York or Chicago.  Loft neighbors from nearby, good friends and new friends, were always found at the Perk, and the weekly event would surpass the expectations of the organizers.

It was just a few days before Christmas that the real discovery was made though.  The flyer caught my attention immediately, having hear Rowland the Bastard on an internet broadcast.  I think it was Groove Radio.  There were not too many at the time; perhaps, only 10 or so good ones really.  Sher and I decided to make the journey to Lawrence and check out Christmas Massacre.  The date and time were perfect, and knowing a few of the locals listed, we had a general idea of what to expect musically.  It stopped there.

We arrived relatively early to catch some of locals we had seen at various times at Evos, and had great seats to the unfolding of a rave.  There really wasn't but about 20 or so folks there at first, but this did not deter the DJs at all.  Serving up the beats, the kids continued to come, almost in a constant flow of colorr, fluff, candy, and extra lighting, as needed.  There was to be a school girl costume contest of some sort, providing eye candy for all the college guys lucky enough to discover the right party in Lawrence that night. 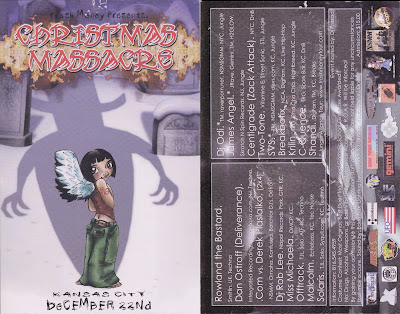 It seemed like no time all and The Little White School House was bulging, and not just on the ground floor.  There was another room in the basement, dark and offering an intrigue all its own.  It was the place to go to just dance, and be left at peace to do so.  Early on, a tight group called Breakbotix really had folks dancing to their unique blend of digital musical alterations. There was a patio out back too, and some rickety old stairs, but no music.  There were a lot of friendly people there though, and it was good opportunity to talk to some folks about what I was doing.  Capturing the explosion of energy in that little spot was denied.  I only got a couple of hours of photos, which provided a little bit of the look and feel of the event, just before that transition into chaos.  We also left early on because of the chaos.  It was nearly impossible to move, upstairs or down, so did not catch any downward spiral that might have ensued by 5 am.  Although, I am not so sure there was one.  Later reports indicated that party went solid for the whole night.  It would have been good to see, but there would be other opportunities. 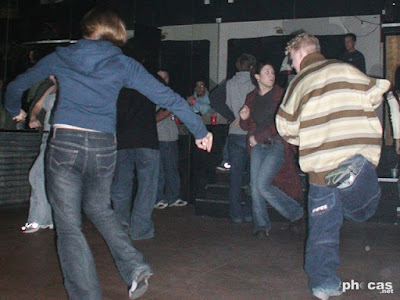 After these few events in December of 2001, the project started to become more clearly defined, and supported by everyone I talked to about it.  There was a special kind of music happening here, equally devoted fans, communal in their faith to the music.  I was going to capture this elusive subculture tribe on digital film, and prove once and for all that they were enjoying nothing different than the various musical cultures and subcultures of the past.

The journey turned out much more than that though.  Other events would be captured, some to their bitter end, broken up and disbanded; more often than not though, most ended with friends traveling together to the after-party, or home together to sleep away the next day, with dreams of beats and good times to come.  The rest of the story will be relayed over the coming months, maybe even year(s), as we continue to post an archive of photography surrounding this journey.  These are notes mostly; the story is much too big to tell in words only.
backstory