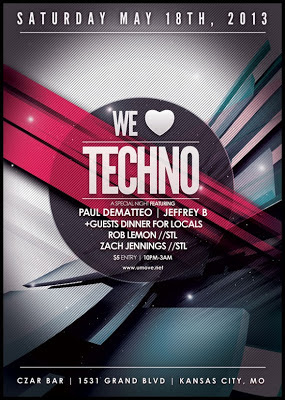 Saturday night in Kansas City, the Czar Bar features Rob Lemon with Zach Jennings from St Louis, along with locals Jeffrey B and Paul DeMatteo.  We've caught Rob's performances on numerous occasions and most recently caught up with him opening for Above & Beyond in St. Louis at Europe Nightclub for a fantastic night of music and dance.

In 2006 Rob formed “X -1” with music production partner Byron Thomas. Their first release “Hypnosis” was released on Curvve Recordings in February 2007 and has made a huge buzz on the progressive house charts. The Terranova & Leeds remix of Hypnosis reached #4 on the Beatport Chart where it stayed in the top ten for twelve consecutive weeks. Hypnosis has been featured by Sharam of Deep Dish on Radio One’s Essential Mix and has been played regularly by Paul Van Dyke, David Guetta, Dean Coleman, D:Fuse, Tall Paul, & DJ Dan. Currently Rob & Byron are releasing music under their own names. (RobLemon.com) 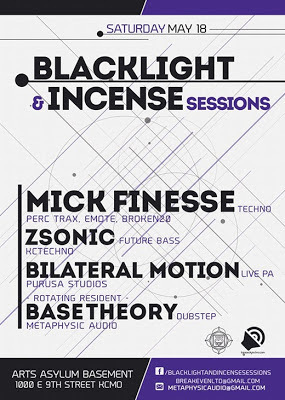 Alternatively, the Arts Asylum Basement downtown will feature “Blacklight & Incense Sessions.”  MickFinesse will be throwing down his brand of Techno, along with ZSonic with Future Bass, Bilateral Motion doing Live PA and Base Theory rounding things out with some DubStep.  The show promises a serene landscape of glowing amber, ultraviolet light, and smoldering incense dominated by the newly reconstructed META HI FI Sound System.    We were not able to dig up much information about these artists, excepting the MixCloud links their names lead to, but it sounds as if it should be quite and evening out tomorrow night!  For more information on this event, visit KansasCityTechno.com


Summer is here and there is some great music happening tomorrow night in Kansas City, one of the only best places in the country you can go out with out going broke.  So, get out and get  down.
zine.v2