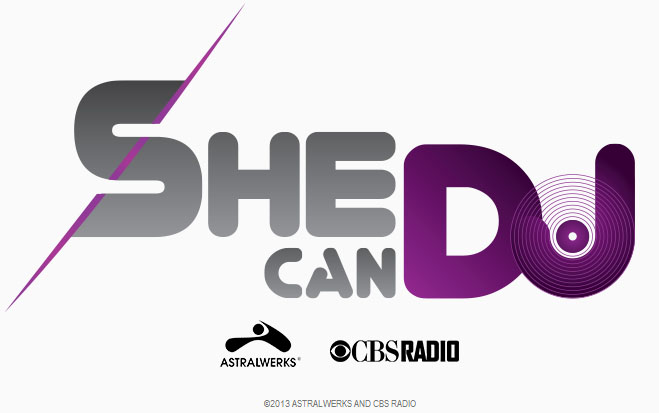 This week an exciting opportunity for aspiring female talent was announced.  Through a partnership with CBS Radio, Astralwerks Records introduced “She Can DJ – America.”  This challenge to all the up-and-coming lady mixers will be quite an interesting contest.  We can immediately identify quite a few locals we have had the opportunity to hear and dance to that should throw their hat in, and very much looks forward to them doing so!  So ladies… listen up!

An effort to discover the country’s top female DJ/Producer will launch in July 2013 with local competitions held in New York, LA, Chicago, San Francisco, Houston, Boston, Detroit, Phoenix, San Diego, Charlotte and Las Vegas.  12 semi-finalists and one wild-card will then compete for a Grand Prize that includes a recording contract with Astralwerks Records, as well as headlining a tour through all of the CBS Radio markets that took part.

“Aspiring female DJ’s/Producers need look no further than She Can DJ for that once in a lifetime chance to captivate an entire industry with their talent,” said Greg Strassell, Senior Vice President of Programming at CBS Radio. “As the competition plays out across our considerable platform of contemporary hit radio stations, participants will be front and center with millions of music fans, and the top decision makers in the business.  The electronic dance music movement has been playing out to much success on radio stations all over the United States, and CBS Radio looks forward to advancing the genre.”

As a label trusted for brining the world’s top dance music talent to America for 20 years, Astralwerks Records plans to bring the very best to fans and competitors.  Playing an integral role in the selection process for this event are legendary acts as such as Fatboy Slim, David Guetta, Hot Chip, Swedish House Mafia and The Chemical Borthers.

“Seeing how successful She Can DJ was in discovering top female DJ/producer’s overseas, it’s the perfect time to launch stateside,” Astralwerks General Manager Glenn Medlinger says. “The United States is the hottest place on earth for dance music right now but the industry is largely male dominated. We’re thrilled to be a part of a program that will help discover and develop top female talent in the dance music space.”
Further details about the competition including rules and regulations will be revealed soon. Visit www.SheCanDJUS.com for the latest updates.

About CBS Radio
CBS Radio, a division of CBS Corporation, is one of the largest major-market radio operators in the United States, with stations covering news, sports, talk, rock, country, Top 40, classic hits, and urban formats, among others. The division operates 126 radio stations across 28 markets, including all of the Top 10.  Operating within CBS RADIO is CBS Local Digital Media, a unique brand responsible for the convergence of the division's new and traditional media platforms through creative original content and advanced delivery methods.