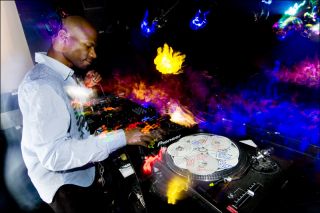 Justin Kleinfeld ~ Are you ready to jack? Get ready… The acclaimed Ministry Of Sound “Sessions” series continues to push the best names in dance music, whether they’re the hottest one-to-watch or the most established veteran, they scour the world over to deliver the optimum level excitement in every release. The 9th in the series comes from the legend himself, Mr. Curtis Jones, giving us the two sides of his musical character from his Cajmere moniker of the finest house music to the twisted but quirky beats and vocals of Green Velvet.

Curtis Jones has long been heralded as one of the true greats to come out of the U.S. dance scene with his productions having always received a ridiculously large amount of support and attention from DJs across the board. He played a key role in nurturing the Chicago house renaissance of the 1990’s with his seminal label Cajual Records and gained immense success in 1993 with the Cajmere single “Brighter Days” (vocals by Dajae) that is featured on this Sessions mix in the form of the Underground Goodie mix. Later that year, he formed the sub-label Relief mostly for instrumental tracks by himself and others. Besides releases from DJ Sneak, Gemini and Paul Johnson, this is where his alter ego Green Velvet really came alive and “Preacher Man,” “Flash” (Track 2 on Disc 2) and “The Stalker” all helped to cement his reputation as one of the most original and exciting producers in the game.

This mix sees both sides of the man go head-to-head with a Cajmere mix on Disc 1 and a Green Velvet mix on Disc 2. As you’d expect, Cajmere rolls in with his soulful touch; combining classic jackin' beats with swinging horns and lush vocals. As usual there’s a few surprises along the way, with his use of James Holden’s remix of ‘Safari’ being one of the obvious choices to prick the ears up – he uses it brilliantly! The darker side of the man comes out to play on the Green Velvet CD giving it a far more late night feel with strong acid undertones and faster, tougher beats driving the mix. This is the sort of techno that would rock a stadium. Both CDs heavily feature his own productions, remixes and edits.