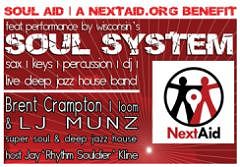 Brent Crampton ~ November 11 - 2006 - Omaha, NE - Within a single generation AIDS has reached pandemic proportions globally. There are now over 40 million people living with AIDS. Of the 13.2 million children who have been left behind in the wake of AIDS, 95% are in Africa alone, and every 14 seconds another child is faced with losing his or her parent and taking on adult responsibilities because of AIDS.

In response to this, Ultramusique.com is on a soul mission as we present, Soul Aid: A NextAid.org Benefit, which will take place on Nov. 11th, from 7 p.m. – 1 a.m. at The Omaha Press Club (scroll down for directions and parking info).

A celebration of culture for a cause, Soul Aid will feature live saxophone, percussion, keys and dee jay combined in the national headlining jazz-house ensemble known as Soul System (www.soulsystem.com). Opening act will be Brent Crampton, alongside a rare appearance by LJ Munz, with host Jay 'Rhythm Souldier' Kline.

Proceeds will be donated to Nextaid.org and as a further contribution, we'll be hosting a donation dinner from 7-9 pm, where contributors can make a minimum donation of $30 for a full course dinner (this fee includes ticket price as well). RSVP must be received by by Nov. 8th.

Flickering city skyline view, 22-floors up and right in the middle of Omaha’s downtown business district is The Press Club. A private member-based bar and dining club that has previously never been open to club culture, The Press Club offers a high-rise view of the city that extends unto the horizon.

NextAid is a Los Angeles based non-profit organization dedicated to creating sustainable solutions for African children orphaned as a result of AIDS. NextAid actively links artists, musicians and the global community with some of the most impoverished and vulnerable children on the planet. By partnering with various organizations in the production of music events and other awareness raising activities, NextAid channels emergency and long-term aid to African children in need.
NextAid is committed to represent the international dance community in its effective and practical response to the AIDS pandemic. Having worked with top DJ's such as Carl Cox, Miguel Migs, DJ Dan, John Digweed, and organized events in New York, Chicago, LA and Spain, NextAid is an international organization relevant to today's club culture.
zine.v1.stories