Cold Front ~ Like a powerful weather front that overtakes entire regions of the country, so Cold Front has enveloped the mid west breaks scene. Cold Front is Rj Bass and Dj Prato; with over 20 years of dj, rave and club experience between them. The joining of these two dj’s happened in early summer of 2005. However, their history together goes back much further then that.

Rj Bass got his start djing in 1995 while in the army at Ft. Riley KS. It was there that he also became a rave promoter, throwing some of the larger and more popular raves of the Kansas City metro area in the mid to late 90¹s. Rj¹s style and taste in music stem from the influences of his upbringing in South Florida, where in the 90’s, breaks were king.

From the start Rj was all about playing the breaks, but when he hit the KC club circuit in 98 other styles such as house, trance and techno made their way into his sets. As Rj continued playing out and gained popularity, he opened up for dj¹s like Micro, Hyper, Kemek, Simply Jeff, and many more.

In 2001 Rj landed a job writing music reviews, posting charts, and writing scene reports for the Midwest USA on Breaksworld.com (a very popular Breaks website that was shut down in 2003) where his international popularity grew for a time and where Dj Prato would discover him.

Dj Prato was influenced at an early age by the east coast hip-hop and electro sounds from the likes of Newcleus, Grandmaster Flash, and Run DMC and started djing in 1990. A stint djing for a teen night in Columbia MO during college, led him to bigger and better clubs in the area gaining him a loyal following. Prato and his wife moved to the Kansas City area in the mid 90¹s so that he could pursue his career in advertising. 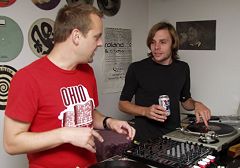 In Kansas City he met up with other local dj¹s and started playing one off events and clubs whenever he could. In 2001 Prato was browsing Breaksworld.com when he came across a scene report for Kansas City. It was then that he discovered the local breaks underground and contacted Rj. He passed on a demo to Rj who at the time was playing on a weekly basis at one of Kansas City¹s larger nightclubs. It wasn’t long before Rj was calling Dj Prato regularly to open shows with him and play out together.

In the spring of 2005 Rj and Prato came together to do a weekly online radio show, and decided to pair up to form Cold Front. Cold Front named their show Frosted Breaks, (where the best of new and old breakbeats are featured). The show began airing on Syde-Sho.com Radio, where they were the first regular weekly show to incorporate special guest sets from well known producers and dj¹s from all over the world. Only 6 months into the show Cold Front was invited to begin broadcasting Frosted Breaks on the extremely popular NuSkoolBreaks.co.uk internet radio station. They accepted the offer and now broadcast their show on NSB Radio, reaching an even bigger audience both locally and overseas in the UK and in Europe.

In May of 2006 Frosted Breaks celebrated its 1 year anniversary show. The success of the show over this first year, gave Cold Front great opportunities to work with popular aritists JDS, Friendly, Kemek The Dope Computer, Manual Neztic, Elite Force and many more. Today Frosted Breaks is a bonified hit across the globe. As the show continues to gain popularity, greater things from Cold Front are expected, including the creation of the first Kansas City based NuSkool breakbeat record label. Production for Cold Front is also on the rise with Prato churning out new tracks on almost a weekly basis. Cold Front continues to play out regularly and their live shows have never been better. 2 turntables, 2 cd players, Serato Scratch and tons of cutting and mixing have made Cold Front one of the best acts in the Midwest USA.

To get more information about Cold Front and Frosted Breaks including Frostcast the brand new Pod Cast, check out FrostedBreaks.com, RJBass.com or DJPrato.com!