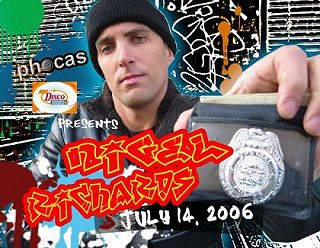 flyer artwork by Chrissy Laing - Kansas City, MO - July 14, 2006 - phocas.net in cooperation with Disco Productions, will begin the first in a series of dance music concert events at The Grand Emporium in Kansas City, MO featuring some of the best in world-class and internationally recognized talent from across the country and around the globe.

The first in the series will feature internationally renowned DJ, Producer & Recording Artist, Nigel Richards and future talent will be announced at each show. Don't miss out!

It has been two years since Nigel Richards has played in Kansas City at Chaos Theory v2.0, when he turned the main dance floor inside out for more than a thousand who just could not keep from dancing to his skils on the decks.

A unique performer and very personable guy, Nigel's career in the dance world spans nearly 20 years and includes heading up an internationally recognized record label (611 Records), 40+ records, 3 mixed cd’s and a whole lot of globetrotting! Needless to say, all of this has made Nigel a wanted man around the world and this experience shines through at every performance, as he rocks crowds with new sounds while keeping the masses comfortable.


Kicking the night of at 10 pm, will be the newly reunited Tactic [Ben Fuller & DJ Candlewax (Flea Market / Heavy Lounge)]. These two are definitely one of Kansas City's hottest duos, previously featured "on decks" in August 2005 issue of phocas.net and featured again in this month. The last time I saw them together, they had a full Kabal dance floor shakin it! It will be good to have them back together! For more information about Tactic, visit this month's "on decks"!

Recognizable as Kansas City's most important landmarks of music, it's history goes back as far as most people in Kansas City can remember. Over this time, it has always maintained a solid reputation for showcasing some of the best talent seen in the music industry across nearly every genre. It has only been in the last year, after a complete remodeling, that Dance Music stepped up to the plate at The Grand Emporium, easily complimenting it's already diverse lineup. With good sound, a clean sleek appearance, as well as a bar and lounge area that are out of the way of the dance floor, this is the kind of evolution that has allowed The Grand Emporium to be passed from one generation of dancers to another. Whether it be Blues, Soul or Dance, it has always been the place to get your groove on. More information about the Grand Emporium can be found at their website, kcClubs.com.