armin van buuren made in ny

Linda Lee ~ New York, NY - For two special days/nights, Made Event presents internationally renowned DJ Armin van Buuren at the Tobacco Warehouse in Brooklyn Bridge Park with a stunning vista of the majestic Lower Manhattan skyline on the waterfront. This is a special 'Armin Only' event where the Dutch trance superstar DJ plays solo for the whole night.

This spectacular two-part series is the first electronic music / DJ event of its kind in the beautiful and dramatic Tobacco Warehouse with 30,000 watts of custom Integral Sound installed. The Tobacco Warehouse is a roofless 2-story structure that has been nationally recognized as a historic landmark and opens into the Empire-Fulton Ferry State Park, where U2 ended their last album tour with a special performance between the Brooklyn and Manhattan bridges.

Armin van Buuren is one of the highest ranking DJs in the world (DJ Mag #3) and belongs to a cadre of Dutch DJs that have gained world wide recognition. Armin is now armed for another whirl wind tour in support of his latest mix album 'A State of Trance 2006' on Ultra Records (May 16). For this album, Armin chose a new concept for both sides: Disc 1: "On The Beach" has 13 summer-tinged tracks and Disc 2: "In The Club" contains his biggest dancefloor-fillers, including his original, upcoming single, entitled "Sail." 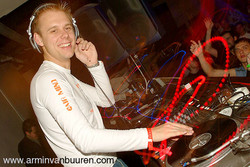 Armin van Buuren's recent second artist album 'Shivers' has already won 2 awards in the category "Best Album" at the Dutch Release Dance Awards and the prestigious Edison Awards, following '76', his debut artist album released in 2003. His first music DVD 'Armin Only - The Next Level' represents the unique atmosphere of a 9 hour long an 'Armin Only' DJ set at a 12,000 person event in Rotterdam. The DVD released in January 2006 entered the Dutch charts with a number one position. More recently at the Miami Winter Music Conference 2006, Armin received the International Dance Music Award for 'Best Mix Radio Show' for his radio show "A State Of Trance" which celebrates its 250th global broadcast this month with transmission in over 20 countries.

Made Event is committed to excellence in the promotion, production, and execution of electronic dance music events. They constantly bring a world-renowned caliber of entertainment into ever increasing unique and innovative venues, and seek to push the limit of expertise in their field. Made Event was the trailblazer for bringing international DJ events to Central Park and this August 2006, they bring their award-winning event Made in Central Park with Paul van Dyk back again for the 4th successful year in a row. Now, Made Event continues their series of groundbreaking events with this unprecedented electronic music event 'Armin Only' at the Tobacco Warehouse.