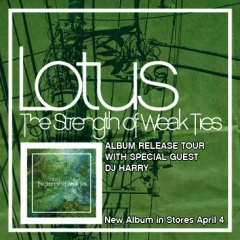 Justin Kleinfeld ~ On May 16, Lotus will release their brand new CD The Strength Of Weak Ties. The new album combines the rock edge of live guitars and percussion with the synthetic bleeps and crushing beats of dance music - and it works to a stunning effect. In a live setting Lotus, plays every note on the spot and nothing is ever prerecorded. The improvisational nature of the live show leads to a spontaneity and excitement that just can’t be achieved by “pushing play.” The act is already an underground sensation having sold out countless gigs across the country thanks largely in part to great word of mouth and will embark on their largest North American tour this spring.

Lotus - AKA Steve Clemens, Jesse Miller, Luke Miller, Chuck Morris and Mike Rempel – formed in 1999 and quickly developed a huge and loyal fan base thanks to non-stop touring in U.S. markets big and small. Fans started following the act across the country and traded tapes like they were baseball cards. This lead to Lotus's 2002 debut album VIBES, recorded live in concert during the fall of 2001. The first pressing of VIBES sold out in February of 2003. Follow-up albums Germination (2003) and Nomad (2004) cemented Lotus’ close knit relationship their fans and provided a tasty appetizer of what was soon to come. The new album, The Strength Of Weak Ties, is an exciting album that unites house and drum 'n' bass with elements of jazz, funk, and worldly music from India, Africa, and Latin America. The album digs deep into musical connections and explores where the familiar meets foreign - glitch-hop programming meets rock 'n roll drums, overdriven guitars meet overdriven synthesizers, primitive drum machines meet funky back beats, and post-rock meets electronica.

“Musically we wanted this album to contrast raw and dirty sounds like guitar feedback, roomy sounding drums, with obviously electronic sounds like drum machines, and analog synths. We worked to give it a loose yet tight feel; have the details of a headphone trip, but still rock out.” – Luke Miller

Live, Lotus' seamless mixes and interlocking rhythms sound like the work of a DJ, but with a human touch. This results in a sophisticated yet accessible form of dance music with the versatility to react instantaneously to the crowd and atmosphere of a room. Lotus' most recent cross-country jaunt during this past Winter 2005 showcased just how well the band has grown by word of mouth and internet communities. They sold out venues such as the Fox Theatre in Boulder on their first true headline in the room, sold out Tribeca Rock Club in NYC, supported the North American leg of the Ozric Tentacles tour, and closed it out with an opening slot for Michael Franti & Spearhead.

To date, Lotus has been featured in Relix magazine, SF Examiner, Pittsburgh Post-Gazette, Times Leader, Weekender, Fort Collins Weekly, Hittin' the Note magazine, Jambase.com, Jambands.com, The Onion, as well as many more regional magazines, newspapers, websites and specialty radio shows. Be sure to catch Lotus on the road when they visit a city near you!