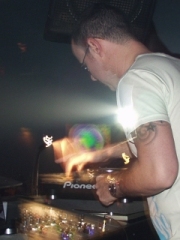 Justin Kleinfeld ~ photo by todd ~ Judge Jules, one of the most popular DJs on the planet and currently ranked in the top 10 DJ Magazine poll of The World’s Most Popular DJs, will be releasing two CDs on KOCH Records in 2006. The first, a DJ-mix set, entitled The Global Warm-Up features 16 hard-edged tracks chosen and mixed by Jules for release on April 18th. Proven Worldwide is Jules’ much anticipated debut artist album and will be released on May 23rd. Combined, this will be the first domestically released material from Judge Jules since his classic Journeys By DJ mix CD set was released on Moonshine in 1993.

Born in 1965 with the proper name Julius O'Riordan and educated at the London School of Economics where he studied law, Judge Jules took his stage name from his legal background. He began his music career as a DJ on early London pirate radio station KISS-FM before he joined global BBC Radio 1 in 1997, where he now has a regular Saturday night show called “The Weekend Warm-Up.”The The Global Warm-Up mix CD is titled after this radio show that also is simulcast on Sirius Satellite Radio in the states. The CD captures the global hard-edged house and trance sounds that Jules is known for spinning in some of the biggest clubs from the UK to the Far East to South America to the United States. Jules has had a slew of successful releases over the years in the UK and Europe on a number of high profile imprints including Ministry of Sound, Universal UK, Blanco Y Negro and Euphoria.

Jules is responsible for launching many huge dance tunes and acts via his UK radio show, and is a pioneer for commercial contemporary dance music. He is crossing over into the North American territory as a producer issuing his first ever solo artist album ever, Proven Worldwide on May 23rd. His past productions have appeared under the name Hi-Gate where he scored a top 10 hit in the UK in 2000 with the song “Pitchin’ (In Every Direction).” His first single off his solo album “So Special” is already Top 15 on the U.S. Dance Radio and Club Play Charts and looks to be a commercial crossover success for the summer of 2006.

Judge Jules is best known beyond his radio show for his legendary DJ residency on the “white isle” of Ibiza, Spain called Judgement Sundays. The night runs for the entire summer season and as well as being the main resident DJ at this night he also promotes it. Because of the work involved, Jules has a second home in Ibiza as well as owning the restaurant “Kasbah” on the island. Recently, due to his long-term knowledge of the island, CNN featured him in an interview about Ibiza on a travel digest of where to stay, what to do and when to go.

A lifelong and passionate follower of football, or soccer as it is known in the United States, he is a huge fan of Arsenal and was asked to remix the English Premiere League’s offical anthem in 2005. An entire feature on him was presented in August of 2005 for the show “English Premiere League Preview” which airs weekly in the U.S. on Fox Soccer Channel.