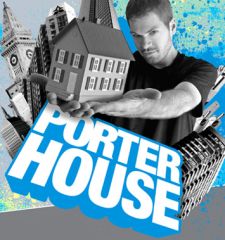 Betty Kang ~ All aboard for the Porterhouse express! Get ready for a ride with one of the most exciting US artists to be making the rounds on the global dancefloor. Steve Porter is set to release his first-ever mix compilation ‘PORTERHOUSE’ with 26 tracks melded together on 1xCD in his signature genre-defying, pulsating, energetic Porterhouse style. The album merges his DJing and production style with 9 of his own original tracks, further blurring the distinction between DJ and producer into one compelling artist to watch.

The ‘PORTERHOUSE’ ideology of “no rules, no borders” to dance music resonates here on the album with an eclectic range of funked-up house beats with a techy-edge, breaks interludes, electro action, techno twists, and sound-clash attitude that blurs the boundaries between musical genres. All this is induced by his own re-edits and mixes that mold his highly individual DJ sets and track selection, as Steve soldiers on in his mission to furiously push his Porterhouse sound.

‘PORTERHOUSE’ is a unique, personal mix album for Steve. After receiving over 300 tracks for consideration Steve says, “I received so many amazing tracks (thank you labels!) and I entertained any and every piece of music. However, I always had the idea in my head that I wanted to keep the project as in-house as possible and ultimately having a sense of family on the album is the concept that won me over.” In completing the album with a whopping 26 tracks, Steve has the innate ability to hone down tracks to make their moments more distinct and he says, “I like to get right to the point when I mix, deliver the goods, and drop into the next record.”

The album’s music draws upon Steve’s close network of talent that comprises a new Porterhouse Regime from the Boston area. These are fresh and exciting young producers whose studio production skills have been honed out of the music media spotlight, and while they might not be the biggest names in the industry (yet), the tracks they produce are played by world class DJs from every continent. Some of these artists include his long-term collaborators; Agent 001 cohort Eli Wilkie, Emjae, and Chris Reavey, as well as emerging artists Bons, Hush, Musky, Aaryn Blain, Chris Micali, Jonathan Hart, and the Island 9 crew. On this strong support network Steve says, “it's a crew that has always supported one another, no matter how dingy the gig.” At the end of the night, Porterhouse is all about a party with friends.

In 2005 Steve Porter released his debut artist album ‘HOMEGROWN’ to much high praise regarding it as the “future of dance music” (BPM MAGAZINE) and as an “infectious new sound that blends elements of funk, techno, retro-electro, trance and progressive house.” (INNERPHASENY.COM). After touring extensively across the U.S., Canada, Australia and Europe, Steve settled back in NYC to compile

‘PORTERHOUSE’ and a separate studio session with Lee Burridge during his NYC residency for Lee’s impending ‘365’ album. Steve will now embark on a relentless, non-stop North American, UK & European tour before returning for his annual Porterhouse party at Winter Music Conference 2006.