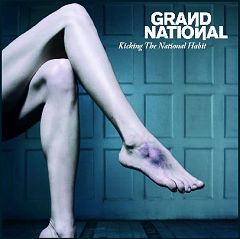 Justin Kleinfeld ~ Recall Records is pleased to announce the highly anticipated North American release of Grand National’s Kicking The National Habit. Released on February 21, 2006, the North American package will feature seven bonus tracks not available on the original UK release, including remixes by Sasha and The Glimmers. Also added is a bonus video for “Drink To Moving On,” directed by Ramon & Pedro.

For those in the know, Grand National (AKA Rupert Lyddon and Lawrence “La” Rudd) is a band to watch. Even without a proper U.S. record release, the act’s debut Kicking The National Habit has found a cult following stateside. Some of America’s finest publications are also singing the early praise. URB featured the act as one of the NEXT 100 acts to watch in 2005, while BPM recently featured Grand National alongside The Killers, The Bravery and New Order as part of its special dance / rock issue. Esteemed publications including Spin, Billboard and CMJ have also written glowingly about the act, while influential radio stations including the world famous KCRW have provided early spins.

America is only beginning to learn what much of the world has already known for quite some time – this band has “it.” Grand National’s sound is unique, evoking equal measures of The Police, The Happy Mondays, and New Order, while maintaining an originality all the while. There’s mass appeal here too, from the rockers, to the reggae fans, to the dance heads, and, dare we say, a pop hook or two. Live, a full six-piece band ensures that standout tracks like “Drink To Moving On,” “Peanut Dreams,” “Playing In The Distance” and “Cherry Tree” vividly come to life.

2005 has seen great success for Grand National. The band is approaching star status in the U.K. and Australia, with France going especially crazy over the band (Sofia Coppola and Kirsten Dunst were spotted in the front row at a summer Paris gig.) Additionally, the band’s original music has appeared in popular television shows including CSI: MIAMI, SIX FEET UNDER, and ENTOURAGE, while a remix of “Talk Amongst Yourselves” was the first (and standout) track on Sasha’s critically acclaimed Involver CD.

Watch out for North American tour dates in 2006!

TRACKLISTING
Video: “Drink To Moving On”

* Bonus Tracks / ** Exclusive bonus tracks not available on the original UK release. Also added is a bonus video for “Drink To Moving On,” directed by Ramon & Pedro