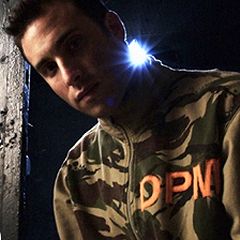 (Justin Kleinfeld) Thanks to his hectic DJ schedule, original music productions and remixes, Exacta is one of the fastest growing talents on the New York City house music scene and a name to watch out for in 2006.

Recognizing his talents behind the decks, Erick Morillo invited Exacta to be a resident DJ at Pacha NY and booked him for a slot on the club’s much anticipated Grand Opening night. In addition to his multiple residencies, he has also been confirmed to DJ at Mariah Carey’s New Year’s Eve party at NYC’s Cipriani. Exacta pumps his signature fusion of funky House music at residencies at Crobar NY, Pink Elephant, and Gypsy Tea After Hours in New York City.

Exacta is one of the few artists in the industry who not only writes his own lyrics but also produces his own original tracks. As a result, no two Exacta records ever sound alike. Each track captures a raw New York City vibe from the man who has controlled the decks at almost every New York City hotspot and mega clubs around the world. Already stirring a big buzz on the UK's Essential Mix and with Roger Sanchez, Deep Dish and Saeed Younan, is the debut release on his own Compulsive Music – Exacta’s reworking of House classic "Pride (A Deeper Love)”. Exacta has also become a mainstay on Erick Morillo’s Subliminal Records where he has released the hits “The Beat Is Inside You” featuring Sandy B and “Flippin.” January 16, 2006 will see the release of his latest Subliminal bomb, “Shake My Soul.” On the remix front, Exacta has recently been commissioned by Peter Rauhofer’s Star 69 Records to remix Suzanne Palmer’s “Keep The Faith” and Cevin Fisher’s “Love You Some More;” and Nervous Records to remix Kim English’s “My Destiny”.

With Exacta’s time already filled up with top DJ gigs and his production work, you would think he barely has free time for anything else. However, Exacta is also working around the clock on the development of his Compulsive Music label. Set to launch in January 2006, Compulsive Music is a digital e-label that delivers fresh, cutting-edge House music and the lifestyle that it encompasses. Compulsive Music is a technologically advanced platform showcasing rising and established names in House music from every corner of the globe.
For the more information on Exacta check out DJExacta.com, CompulsiveMusic.com or RephlektorInk.com.
zine.v1.stories