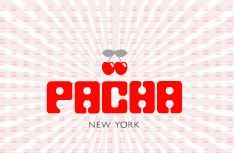 Betty Kang ~ New York City, NY – November 17, 2005 – World-renowned lifestyle brand Pacha is teaming up with DJ/producer Erick Morillo to launch Pacha in New York City this fall. The newest member of the international nightlife consortium will be the first North American branch of the club.

Pacha was founded by Ricardo Urgell in 1967 with a single club in Sitges, Spain. The family-run business has since grown into a global brand that encompasses more than 25 nightclubs, restaurants, a hotel, a record label, a radio station, a bilingual lifestyle magazine and a full-scale merchandising division built around their recognizable cherry logo. This year, they entered the resort industry with Isla de Pacha, a private island off the coast of Brazil.

“After 36 years and 25 nightclubs, it has been the dream of Pacha to host a New York venue. We believe New York is the spiritual home of discos and nightclubs and we are happy to be a part of its great history.” says Pacha brand director Danny Whittle.

Showing its commitment to music and DJs, Pacha has commissioned New York’s first Dynacord alpha concept sound system, imported from Germany. The system, built specifically to play dance music, is also in place in Space Miami. Unlike other large New York clubs, Pacha’s DJ booth is set in the center of the dance floor, providing a connection between DJs and dancers.

“I want this to be a club where the best DJs in the world will come to play on the best sound system in the world,” says Morillo. Known for consistently drawing unprecedented crowds to Pacha’s flagship club in Ibiza, the producer and Subliminal Records label head will serve as a resident at the New York location.
Frequented by celebrities like U2, Kelis, Kylie Minogue, and Shakira, Pacha Ibiza has long been a fixture of the international party circuit. In addition to Morillo, prominent DJs like Danny Tenaglia, Roger Sanchez, David Morales, and Deep Dish have played there in the span of a single season.

The name ‘pacha’ comes from Spanish folklore and loosely translates to “live like a king.” New York’s Pacha will fully embrace that philosophy.