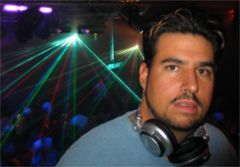 Troy Gilmore ~ photo courtesy of Blue Moon Productions ~ Nationally renowned for his truly innovative and creative sets, as well as his extremely sharp mixing skills, DJ MCB is quietly becoming a house hold name in the dance community, and behind the decks of dance clubs throughout the United States. MCB is revered by many as one of the most talented House DJ’s to come out of Arizona. His inept ability to master multiple aspects of house music and integrate them together, throughout his 12 years in the industry, is simply breathtaking. Whether he is spinning a very groovy/ sexy, “Deep House” mix, with a sprinkle of funk to a crowd of 200, or throwing down a slamming “Hard House” set with a touch of “Breaks”, to a crowd of 5000, MCB keeps the masses moving, and thirsting for more. His ability to master many styles has allowed him to develop his own style in a sense. Choosing not to be categorized as simply a “Deep House” or “Funky House” DJ but rather an artist with a universal flavor. His style knows no boundaries and can be adapted to any crowds liking, whether it be a huge nightclub or an intimate setting. MCB truly is a master of all trades when it comes to Dance Music. This mastery is reflected in his growing popularity in the dance music community throughout the United States.

Much of DJ MCB’s sensational musical skills were developed by working with, and learning from the very best in the industry. Having played alongside the likes of: Bad Boy Bill, DJ Irene, Richard Humpty Vision, Dj Rectangle, David Garcia, Robbie Rivera, George Acosta, Felix the Housecat, and many others. MCB has gained a true understanding and appreciation for all aspects of dance music.

Currently MCB continues to rock crowds from coast to coast with his breathtaking talents, and is in constant high demand. When not on tour MCB currently holds residency at Arizona's world renowned Mega Club Myst, where his prized night, “House 7340” has become one of the most sought after DJ destinations in America.

2005 will mark a historic year for MCB as he makes his debut performance at Winter Music Conference in Miami. Additionally, “06” will bring many more tour performances, and non stop crowd rocking through out the world. If you have yet to catch a performance by this magnificent artist, you are in for a performance you will not soon forget.