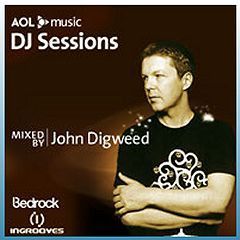 Betty Kang ~ New York, NY - In a digital showcase for world renowned DJ, John Digweed, AOL Music and INgrooves have teamed up to release a their first album featuring mixes from his exclusive AOL Music DJ Sessions set that will only be available for sale online. AOL Music debuted the album on Monday, November 14 in a full Listening Party - giving fans the opportunity to hear it in its entirety at AOLMusic.com. Then beginning on Tuesday, November 15, fans could purchase AOL Music DJ Sessions: Mixed by John Digweed exclusively from Apple’s iTunes Music Store. In December, fans will be able to visit other online outlets including AOL Music Now and others to purchase the digital album.

The release of AOL Music DJ Sessions: Mixed by John Digweed marks the first time AOL Music and INgrooves have partnered to produce and market a full length digital album that will be distributed online.
AOL Music features exclusive DJ mixes by world-famous DJs including Sasha, Hybrid, Sander Kleinenberg and Roni Size on its Dance/Electronica page and on the DJ Sets station on AOL Radio.

John Digweed is ranked as the number six DJ in the world according to a recent DJ Magazine poll. Formerly part of the world-famous DJ Duo Sasha & Digweed, he was the first British DJ to hold a residency in legendary New York City hotspot Twilo. The Hastings, England native scored two Top 30 hits in 1997 with remixes of Chakra's "I Am" and Bedrock's "For What You Dream Of" (featured in the hit movie Trainspotting).

AOLMusic is a leading online destination for music, reaching millions music fans a month through a rich array of programming, products and services that make it easy to discover, experience, listen to and buy music online.

INgrooves is a digital record label and technology company that provides artists and indie labels with distribution, marketing, and licensing services through its INgrooves™, INgrooves Mobile Music™, and Digital Music Access™ brands.