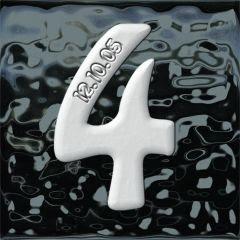 It really has been 4 Fabulous years and we are definitely looking forward to our fifth year of keeping you in touch with with what's hot in electronic dance music, not just in Kansas City, but all over world!

As with every event we do, we strive to introduce you to what we know and feel to be among the best talent in the United States and abroad. This year we have searched all over to give you a night to remember, as well as provide you with a proper introduction to one of the best DJ and Producers from Los Angeles to warm us up with a little West Coast House.

Before we get to that though, beginning the evening in the upstairs lounge and holding it it down for the night will be Kabal resident, DJ Ataxic. He is definitely one of the best, and certainly one of the most popular HipHop DJs in Kansas City. He said that he might even drag in a special guest to change things up a little.

Meanwhile downstairs, starting off the night right, will be Kansas City's very own House Diva, DJ Manders. She will be warming things up for us with her own sexy brand of House that has earned her a special place in the hearts of so many in Kansas City.

Just when you think it couldn't get any hotter, all the way from the Los Angeles, for a special 3-Hour phocas.net 4th Anniversary Party Set, to be recorded Live, DJ Blackliquid, (Magnify Music, Mixxology Recordings, Shaboom (USA) and Laughing Bubble Entertainment!). With 20+ years as a DJ/Producer/Composer and now educator, his soul-full blend of House, unlike any heard in Kansas City, will get your body groovin all night long.

Until he gets here though, BlackLiquid has took a little bit of time just a few days before this article was published to lay down a new mix, exclusively for phocas.net. Be sure to drop in on this month's "on decks" column for a little pre-party sip of BlackLiquid.

This will be Blackliquid's first and only appearance in Kansas City on December 10, 2005 at "4 - The phocas 4th Anniversary Party", hosted by Kabal Restaurant & Nightclub, 503 Walnut, Kansas City, MO.

Come out early and celebrate with us all night! We have special reduced priced admission before 11 pm and few giveaways and other surprises in store! If you can't make it early, watch the message forum thread for a special announcement on how to skip the line at Kabal!