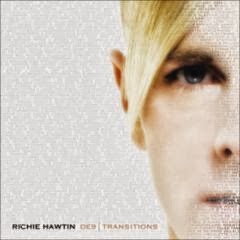 by Betty Kang ~ The next project from one of electronic music’s most prolific artists, Richie Hawtin, is due out November 1 via novamute/Minus.

Titled DE9: Transitions, it’s part of his DE9 series that started with Decks, EFX & 909 (1999) and was followed by DE9: Closer to the Edit (2001). With the use of new recording advances and automation techniques, Hawtin uses his new-found freedom to expose a new area of the mix--that of the "transition."
Realized in 5.1 surround sound and using the latest recording technology to create an immersive sonic experience, DE9: Transitions encompasses 95 minutes of altered perception. Hawtin has used Abelton Live and ProTools software to strip apart, and then reassemble, his component tracks to make completely new pieces of music, combining multiple elements simultaneously into a constantly shifting collage of sound. Technique aside, DE9: Transitions is a powerful and compelling trip. To fully maximize the apprehension of this concept, DE9: Transitions will be released as a CD/DVD complete package, including a 75 minute stereo mix (CD) featuring extended 96 minute stereo and 5.1 surround sound versions of the album, as well as high-resolution audio versions, two new videos, an 'About DE9' short film and live footage from Time Warp, the major electronic music event in Germany.

DE9: Transitions combines everything from original Hawtin productions to unreleased tracks straight from the studios of cutting-edge producers like Ricardo Villalobos, and adds flashes of classic techno moments which inspired him when he was a young clubber. But most of the tracks are fundamentally transformed from their original states. Some fade in and out over a period of minutes, while others are reduced to one single sampled note. The on-screen read-out on the DVD version of DE9: Transitions illustrates the smoothly shape-shifting outline of a remarkable complex project. In fact, the tracks are so close to becoming entirely new compositions that Hawtin has made the decision to give them his own names.

“It’s taking a chance, doing a mix CD and giving the tracks my own titles representing what these pieces have become,” Hawtin admits. “But I believe it’s gone far enough that I can do that. Some people might get pissed about it; we’ll see. The CD artwork plays with that; it’s a picture of my face which is totally made up of these track names, so it shows you that although this is made by me, I’m no greater or lesser than the information I’m using.”

In support of DE9: Transitions, Richie Hawtin's confirmed US Tour Dates at this time are: