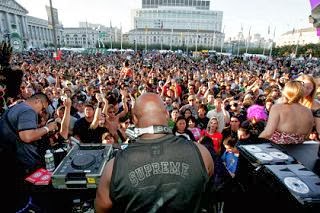 by Betty Kang ~ photo by Misha Vladimirskiy ~ San Francisco, CA - Love was in the air on Saturday, September 24th for the second annual Loveparade San Francisco. On this day, 89,000 participants joined together in an alliance of music and diversity.

The spectacular weather provided an ideal setting for Loveparade San Francisco. Twenty four floats paraded down Market Street, the city’s main thoroughfare, for the procession. The marching line-up was comprised of large floats, art cars, dancers, performers and costumed participants, all championed by crowds stretching through the heart of downtown San Francisco. The parade culminated in an all day festival at Civic Center Plaza where more than 200 DJs performed. Participants gathered to observe, dance and listen to the diverse spectacle of electronic music and creative pageantry.

“This year’s Loveparade far exceeded our expectations in terms of the enthusiastic crowd, orderly conduct and cooperation with the City of San Francisco. We’re so proud to bring together the nation’s largest celebration of electronic music, and we look forward to carrying on the tradition next year.” - Joshua Smith, Loveparade San Francisco Board President

The success of Loveparade is a great testament to the City of San Francisco and to the current state of electronic music in America. The prevailing sentiment had a carnivalesque feeling of merriment and celebration, where everybody was happy to be a part of something significant for electronic music in America, a moment that instilled a feeling of optimism in all the participants.

Inside City Hall, the VIP / Press area was brimming with people who have supported Loveparade all year and contributed to its success. The Heineken press area hosted interviews and photo opportunities with artists like Carl Cox, The Crystal Method, Mark Farina and others. Meanwhile, The Mutaytor (a Los Angeles based 30 person performance troupe incorporating tribal drums, electronic music, hoop dancers, acrobats and visual effects) performed at the top of the grand marble staircase, under City Hall's impressive rotunda transforming it into a colorful affair with dancing, song, and revelry.

“It was a good day to be in San Francisco if you were interested in the celebration of good spirit and dance music.” -CNET News.com

“[Loveparade]…took over like a collective heartbeat and left the throngs on the sidewalks bobbing their heads in unison.” -San Francisco Chronicle

“Celebrants danced alongside the music-blasting floats. Electronic music shook the concrete under the feet of onlookers, sucking them out into the street to follow their preferred brand of electronic music. By Civic Center, the parade filled the street and the sidewalk with all types of colorful pretty people.” -Oakland Tribune

The organizers would to thank everyone who helped create this year’s Loveparade San Francisco. Without your support we would never have such an event. A special thanks goes out to all the DJs of the world: both those that contributed to making Loveparade San Francisco what it is, and to the others dropping beats all over the world. We are already looking forward to next year’s Loveparade as we continue to grow a new legacy for electronic music in America.