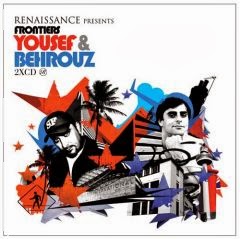 Betty Kang ~ Renaissance is delighted to announce a brand new album series – ‘Frontiers’, a 2CD compilation that pits two DJs head to head with a unique, geographical twist, both are heralding from different countries. The concept breathes a welcome air of originality into the compilation market, the perfect platform to showcase DJs, artists, countries and the ever-expanding global world of dance. Renaissance MD Geoff Oakes says, “We have worked with a number of very established DJs over the years. ‘Frontiers’ will be our platform for artistes who, although a little too experienced to be classed as nu-skool, are still fresh and exciting; driving their respected genre in their own domestic scene forward and knocking down the door of the A-list.”.

No finer example could be found than our inaugural pair – Yousef and Behrouz. Yousef has become one of house music’s finest ambassadors since his Muzik Magazine breakthrough in the late nineties. Renowned for his tough, jacking style that’s always got one eye on funk and the other on the dance floor, he has established himself as the British answer to the likes of Derrick Carter and Sneak. He produces under a number of guises – Drum Bums, Harry Munroe and 10,000 BC – all of which have picked up major support. His most recent remix (under his own name) for Iain Brown is currently being heralded by Pete Tong on Radio 1, picking up the coveted ‘Essential New Tune’ award in the process. He also has an artist album in the works featuring collaborations with other luminaries such as Nic Fanciulli, Gene Farris and Paul Woolford. Over the past two years he has also found time to develop one of the UK’s most successful new club brands, Circus, in his native Liverpool; a project that truly came of age at the end of 2004 when Radio 1 listeners crowned the club the best in the UK in an independent poll.

San Francisco’s Behrouz, by contrast, provides the perfect musical foil. A masterful exponent of all things deep and hypnotic, his DJing and production has become the toast of his U.S peers, most notably Danny Tenaglia and Deep Dish, the latter of which signed him to their prestigious DJ agency and lauded record label, Yoshitoshi. Recent remixes for Narcotic Thrust and Cuba Computer are generating the kind of buzz that helped put his re-work of Narcotic’s first single, ‘Safe From Harm’ at the top of the Billboard dance chart, whilst his own productions (such as ‘Be Free’ as featured on ‘The Sound of Renaissance Vol. 2’) are met with equal anticipation. As a DJ he boasts residencies at two of the worlds best clubs, Ruby Skye in San Francisco and the excellent Red Light in Paris and also plays a major part in Yoshitoshi’s Pacha, Ibiza residence. Couple this with further guest appearances round Europe and the World, plus his American commitments to clubs such as Space, Miami and Crobar, New York and you have one of the hottest DJs on the planet. Little wonder he picked up nominations as ‘Best Breakthrough DJ’ from the prestigious Dancestar organization, ‘Best Newcomer’ at the Ibizan DJ awards in 2004 and “Best Resident DJ” at the Club World Awards 2005.