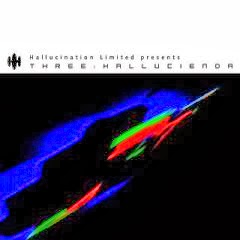 by Betty Kang, PlexiPR ~ The new mix CD from noted New York-based DJ/producer Three of the critically acclaimed Second-Hand Satellites (with Sean Q6) & remix project Three A.M. (with Rabbit in the Moon's David Christophere). The culmination of both the last three years work into the Hallucination Limited record label and the last 11 years of being involved with Hallucination Records (who’s roster included Rabbit In The Moon and electro giants Jackal & Hyde). HALLUCIENDA is Three and Hallucination’s long-awaited, first ‘official’ DJ-mixed CD and captures the genre-bending diversity of both Three’s DJ sets and the output on his Hallucination Limited label. It features rare exclusives and unreleased tracks expertly mixed by Three himself using Pioneer’s DVJ-X1, Allen & Heath’s Xone:92 mixer, Red Zone’s C-Loops sampler and outboard effects.

On this benchmark compilation Three says, “First and foremost this CD is about the label, but I wanted to present it as a live DJ mix that felt like a night out, with some never heard exclusives and mixed with a bit of on-the-fly editing/looping and some live FX in contrast to label compilations which are often more of a “home listening” retrospective of a label’s past releases.” HALLUCIENDA includes Enhanced CD access to a 2ND downloadable bonus mix of Limited and Hallucination Recordings catalog releases, also mixed by Three.

Armed with a sound that borrows equally from vintage acid house, soulful techno and electronic dub, Hallucination Limited has fast become a celebrated underground label in the world of electronic music garnering praise over its first 10 vinyl-only releases from DJs as diverse as LTJ Bukem, Charles Webster, and Lee Burridge. With a catalog of over 45 tracks to choose from on this first retrospective album Three says, “All at once I’m trying to expose new artists & forthcoming music as well as showcase more established names already associated with Hallucination Limited. I also made a conscious effort for the tracklisting to reflect the overall eclecticism of the label’s big brother - Hallucination Recordings – having just celebrated its 10th year.” Over the mix you'll hear sounds ranging from house & techno to electro and, Three explains, “some tracks that hopefully defy any single type of category.”