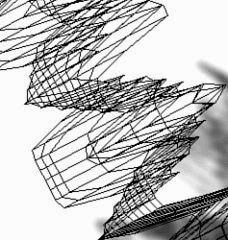 Released in March 2005 on the raster-noton / Asphodel label, the album has received critical acclaim around the world. This new live production of the collaborative project will feature the introduction of a specially commissioned new digital instrument used by Nicolai. An on-stage video installation by the artist will create a distinctive stage set featuring dynamic, real-time visualization of the sound as graphics.

Insen will be presented in major venues across Europe, with a world premiere at the Opera House in Chemnitz, Nicolai's home town. The tour continues with dates in London, Paris, Berlin, Chiasso, Rome, Milan, Bari, Modena and Udine.

Berlin-based Carsten Nicolai is an artist whose work comprises images, installations and music. Exhibited and performed in major galleries and festivals world-wide, Nicolai's works captivate consistently through elegance, simplicity and cool technicism. As Alva Noto, his compositions combine pared-down electronic sounds with the rhythmic groove of hip hop and R&B.

Award winning composer and musician Ryuichi Sakamoto has made a career of crossing musical and technological boundaries. He has experimented with, and excelled in, many different musical styles, making a name for himself in popular, orchestral and film music. In 1987, he won the Academy Award, Golden Globe and a Grammy for his score for Bernardo Bertolucci's film, The Last Emperor.

Insen brings together these two different generations of artists in a live performance that creates a new synergy between acoustic piano and electronic music. Sakamoto's elegant acoustic piano phrasing is manipulated and counterbalanced by Nicolai's subtle digital processing to create vivid dialogues between melody, rhythm and texture. Insen demonstrates these artists' aspirations to explore the idea of electronic music as an inspiration for new musical structures.

The Insen tour is produced by forma arts and media co-produced by Romaeuropa Festival 2005 / Santa Cecilia It's Wonderful.