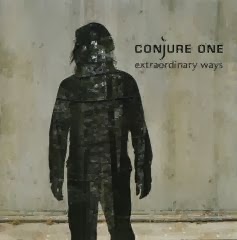 Justin Kleinfeld ~   Conjure One is the product of producer Rhys Fulber. Fulber is best known as a former member of defining industrial act Frontline Assembly and one half of ambient dance project Delerium. You might be familiar with his million-selling Delerium album, Karma, which features the smash hit “Silence” sung by the Grammy Award-winner Sarah McLachlan. the multi-talented Fulber has also been a producer-in-demand for several years. His list of credits ranges from metal outfits Fear Factory (supplying production, programming, keyboards, and arrangements to such popular albums as 1995's Demanufacture and 1998's Obsolete, among others) Megadeth, Mudvayne and Paradise Lost to AOR pop acts Sarah Brightman and Josh Groban.

As with his debut, Extraordinary Ways (08.30.05, Nettwerk America) features vocal performances by several female singers while musically, is a blend of lush textures, haunting melodies and electronic rhythms. However, this time - for the first time in his career - the new album sees Fulber on vocal duties, delivering a unique modern take on the oft-neglected Buzzcocks classic “I Believe.” Two singers from the first Conjure One album also return in the form of Jane and Chemda Kalili, while new vocalist collaborators are Tiff Lacey and Joanna Stevens. The album also features collaborations with Ashwin Sood and Sean Ashby (Sarah McLachlan), Leah Randi (Pink and ex-Abandoned Pools) and London-based composer Chris Elliott who returns to assist with string arrangements.
zine.v1.stories