substance - what are you made of 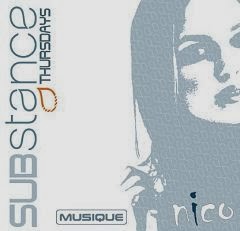 story by Brent Crampton ~ Omaha, NE - You know Nico for their infamous and packed Saturdays, now you’ll also know them for their intimate and palatable Thursdays. Ultramusique brings you Substance: What are you made of?

Straying away from the mass-marketed group, this weekly event will celebrate house music, art, fashion and film. The Bohemia for the unconventional, the refuge for the deep-minded, the path for the progressive – ask yourself – what are you made of?

Every Thursday at Nico (11201 Davenport St.), Ultramusique will be hosting from 9 p.m.–1 a.m., with a wide selection of drink specials including $3 Red Bull vodkas and premium wells. On Aug. 11th, Daryl Cura from Chicago will be gracing the decks to sanctify Nico’s dance
floor. Opening set by Brent Crampton.

Deep house missionary, Daryl Cura, has been evangelizing the sound for over 13 years. Since the early 90's, he has taken his smooth, soulful, Latin-esque sound of uplifting Chicago house and East Coast garage from
the lofts of the inner city to the disco systems around the globe, touching souls in the US, Germany and Switzerland.

As the owner of Eargasmic Recordings, Daryl's vision is to create a new outlet with no boundaries for the deep underwater sounds in Chicago. With releases by Glenn Underground, Gene Hunt and K Alexi, Cura’s label has gained praises from house connoisseurs such as Francois K., Ron Trent and Danny Krivit.Watching the eruption of deep house in the mid 80’s and experiencing the rebirth of the Windy City sound in the 90’s, Daryl Cura is determined to do whatever he can to help resurrect Chicago’s deep house in the midst of this decade. He’ll undoubtedly resurrect the dance floors at Nico.
zine.v1.stories