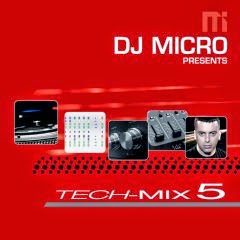 Betty Kang ~ DJ Micro is one of the most respected performers on the U.S. trance circuit and a true veteran of the East Coast club scene. He is constantly pushing himself with his non-stop touring and nearly annual album release schedule for his devoted fan base.

His latest mix compilation entry Tech-Mix 5 represents the night’s peak hours with hypnotic anthems & energetic moments that fade into melodramatic hooks. It is a full-on high energy combination of hard-edged trance creating a sonic soundtrack that will keep the party at full throttle. The mixed album includes exclusive remixes of D:Fuse featuring Jes from Motorcycle “Everything With You,” Paul Van Dyk darlings Second Sun join the dancefloor onslaught with “The Spell” from their debut LP and exclusive tracks by Josh Gabriel (Gabriel & Dresden)“Alive,” Ferry Corsten & Shelly Harland”Holding On,” Joshua Ryan“Blueness,” and a DJ Micro original production “The World Around Me.”

Micro's journey began in 1992 as resident DJ at the famed Caffeine parties, where along with other early DJ luminaries Frankie Bones, Scott Henry and Adam X, the early East coast rave scene was defined. His first release Micro-Tech Mix (Moonshine, 1998) was followed by a large succession of best-selling mix albums, usually one released annually and each increasingly popular as he toured heavily year-round promoting the album and as a testament to his growing popularity among the club kids and rave circuit. In 1999, Micro graced the cover of DJ Times magazine for its high profile Winter Music Conference issue. With an unrelenting touring schedule, Micro’s music is always characterized by his energetic peak hour sets. Micro’s series of Tech-Mix, Caffeine and 2004’s Out Through The Input DJ mixed albums have been in high demand amongst his fans and has positioned him now as “one of America's favorite DJs.”

Tech-Mix 5 gives you just a taste of the adrenaline DJ Micro brings with his live sets, so get ready to be engulfed in peak time madness on his upcoming U.S. tour.