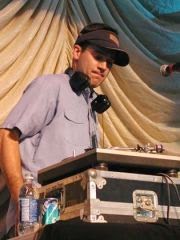 premier artists group ~ Whether on stage or in the studio, DJ T-Rock emphatically grabs hold of the 1200’s and demands the spotlight. Voted “Best Goddamn DJ of 2003” by San Francisco’s legendary independent label Hip Hop Slam, T-Rock has kept his fans happy with two solo albums, numerous mix CD’s, and various appearances on albums and compilations. Bomb Hip Hop, the label responsible for introducing many of today’s most popular scratch musicians to the mainstream, labeled T-Rock, “The Best DJ You’ve Never Heard.” That is no longer the case.

In 2003 & 2004, T-Rock has created a worldwide buzz with extensive touring and the release of his mix CD and feature-length DVD "Sikinthehed". T-Rock is fresh off an 8 country European tour where he took crowds by storm with an eclectic blend of music and turntable trickery. He is enjoying constant rotation on the London based Turntable Radio show, as well as a many college radio programs across the United States.

Throughout the last decade, T-Rock has performed with many well-known artists such as Qbert, Afrika Bambaataa, X-Ecutioners, MixMaster Mike (Beastie Boys), Z-Trip (Linkin Park), DJ Swamp (Beck), and Cut Chemist (Jurassic 5). It is evident that T-Rock is here to stay, ready to perform, and on his way to becoming a household name in the world of music.