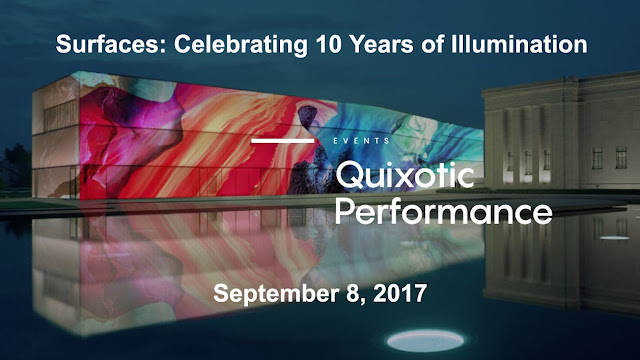 The Nelson-Atkins Museum of Art, in celebration of the 10th Anniversary of the Bloch Building, presented their third "Surfaces" performance, featuring performance group Quixotic.  The free show included projection, choreography, and musical composition in honor of the architect, Steven Holl, quite literally shining a new sort of light on the iconic building. 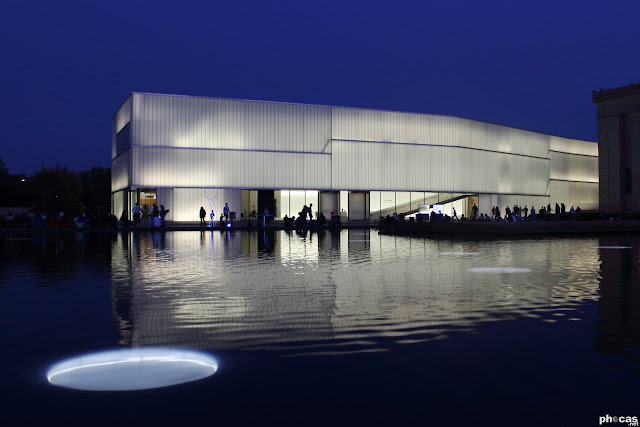 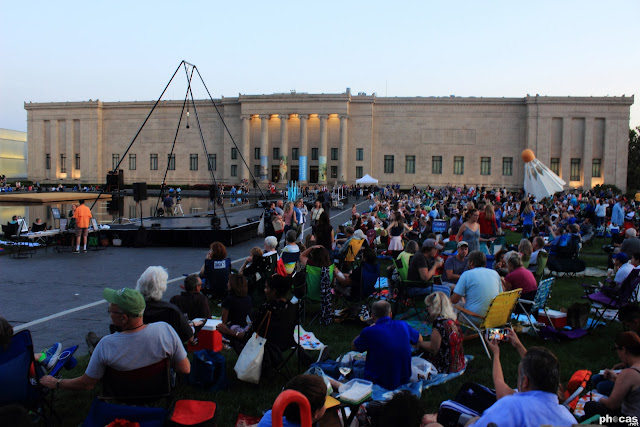 We arrived relatively early, but then so did everyone else.  The area was nearing capacity at 630 pm, with folks lounging on blankets or their favorite chair, patiently awaiting the show. We picked up a great spot, just behind the sound board, with a wide enough viewing angle to catch a good view of all of the various performance stages. 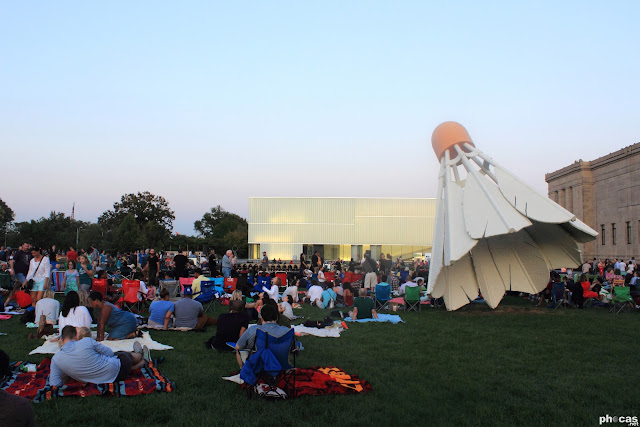 I wandered about the circus-like atmosphere briefly before things got started,, stumbling upon some old friends and taking in the sights.  At one of the homes across the street, a couple of ladies in gowns ambled about the lawn, and a line of food trucks tended lines just as long.

Once the show started, nearly everyone remained riveted to their spot though; well, most everyone. They should have probably shut down the walkway in front of the stage, as quite a few could not seem to keep from wandering in front a bit too often.

Drones are another annoyance the Nelson should consider blocking the next time they host a show such as this.  Two of the mosquito-like creatures zoomed and hovered overhead throughout much of the show, detracting from the performance, and assaulting the auditory sense with their incessant buzzing.  If I had only had a sling-shot, I could have remedied that problem easily.

It was a fantastic show though, from beginning to end, and the night could not have been more perfect either. Temperatures in the mid 20s C kept things cool, but not too uncomfortable for a night out on the back lawn.

Below is a little montage of the video captured from the event.  It is not the greatest in spots, but the finale is as good as I hoped it would be from my vantage point (the last 5 minutes or so of the video); or,  view a few more photos from this event.

view more photos from this event
or add your own to the mix
KC performance
Location: Nelson-Atkins Museum of Art, 4525 Oak St, Kansas City, MO 64111, USA