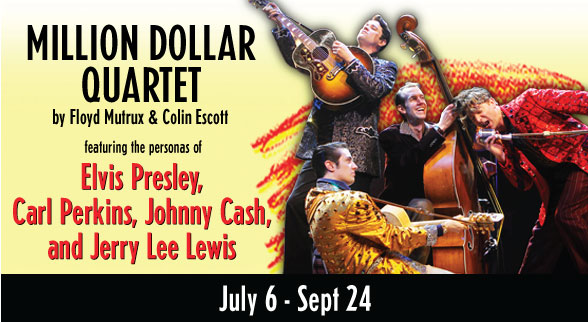 On a rare occasion, we enjoyed the opportunity to attend a little theater situation in Overland Park at the New Theatre Restaurant, featuring the “Million Dollar Quarter.”  It was quite an interesting musical comedy inspired by the famed recording session that brought together original Rock-n-Roll icons Elvis Presley, Johnny Cash, Jerry Lee Lewis, and Carl Perkins on December 4, 1956 at Sun Records in Memphis.

Having always been a fan of their music, this little Broadway musical was a pretty good take on it all. The actors were solid, though few of them actually looked the part beyond their dress.  They came arguably close in performance though.

Dominque Scott, playing Jerry Lee Lewis brought a comedy relief to the affair, and some awesome piano skills, kind of stealing the show.

Scott Moreau, as Johnny Cash played and sang a close second to the “man in black” himself.  James Barry held his own as Carl Perkins too, and Skye Scott as Elvis was an acceptable likeness.

Elvis brought along a girl too, go figure.  Ashley Pankow played the part of Dyanne performing a fantastic cover of the track that made Peggy Lee a jazz legend, “Fever.”

Rounding out the cast, Craig Benton played the part of a torn Sam Phillips, eager to promote these legends, but unwilling to let them be a success without him.

The songs and actors were on point for a full house on this night, and a rocking good time for all in attendance.  In addition to their skit centered on the gathering of the quartet, and flashbacks to their start at Sun, they hammered through some of the most recognized tracks by the four.

No photography was permitted, and completely out of character, I acquiesced.   It would have been difficult to get off any shots without being immediately noticed anyway. It was definitely a show worth seeing though, and perhaps, seeing again.

If you get the chance, it runs through September 24 at this location, and there are still a few tickets left to some of the performances. 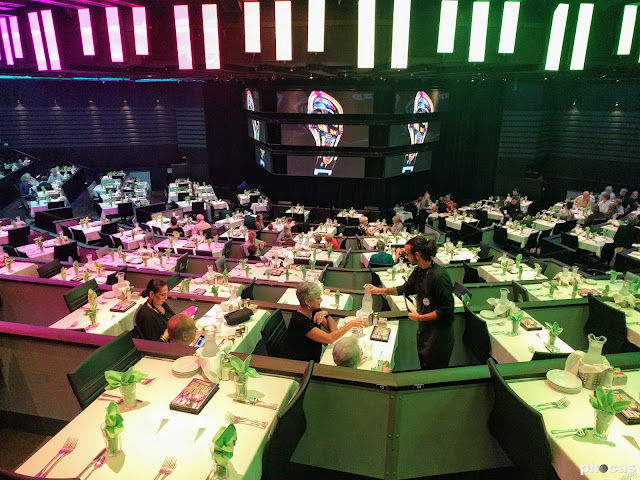