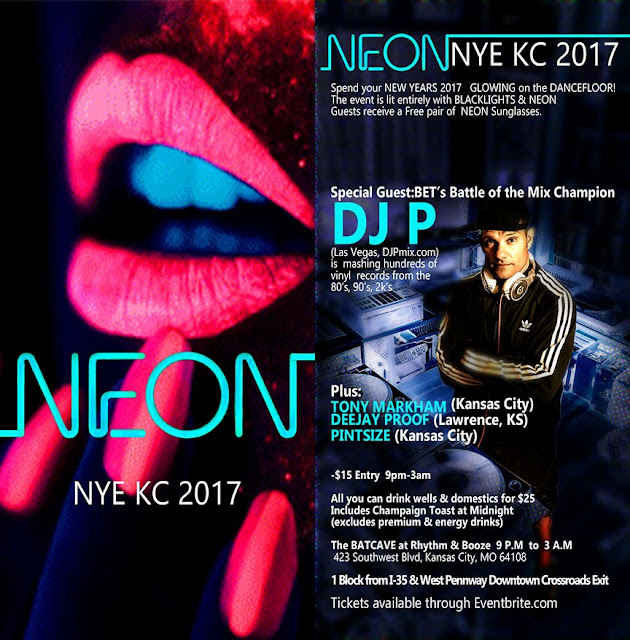 Finding a good event to attend New Year’s Eve in Kansas City is always a bit of a challenge. While there are usually numerous events, they generally lack in the music department.

We checked the internet airwaves a month or so before the holiday, and found a few things. Most of what we found were events with unnamed DJs though, and equally unnamed music; not a risk of which we are particularly fond. 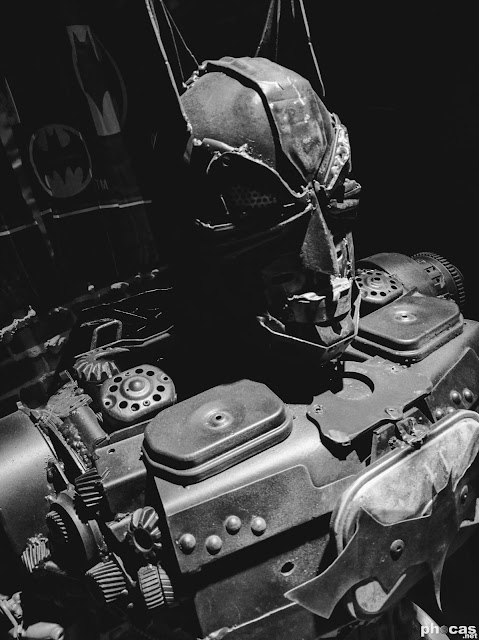 Just about the time we thought about settling for Power & Light, Sherri stumbled on an event hosted by our old friends at Miakoda Entertainment, and featuring DJ P! That resolved the issue quickly and completely.

As one of the pioneers of the “mash-up,” DJ P has been blowing minds all over the country for almost 20 years now. He has won multiple turntablist championships; most recently BET’s Master of the Mix. His career includes several other appearances in championship competitions, residencies in Las Vegas, and collaborations with greats like Mr. Freeze and Jazzy Jeff.


This master of the turntable first caught my attention when he played a show out in Lawrence, with Z-Trip. Standing in amazement, he ripped through records in a frenzy I had never witnessed, in a performance all its own. Some folks never left the dance floor throughout what I seem to recall was a 3-hour set.

Since that time, I have had an opportunity to catch DJ P nearly every time he plays Kansas City, as well as a couple of times in his hometown of Springfield. I have never been disappointed, and this night was no different.

We arrived early, as has always been my habit. I got addicted to hearing the locals play long ago, and there is usually only one way to do that. Go Early. More often than not, they are every bit as good, and occasionally, better than the headliner. Additionally, there is always more space on the dance floor during that time, and fewer stumble bums. 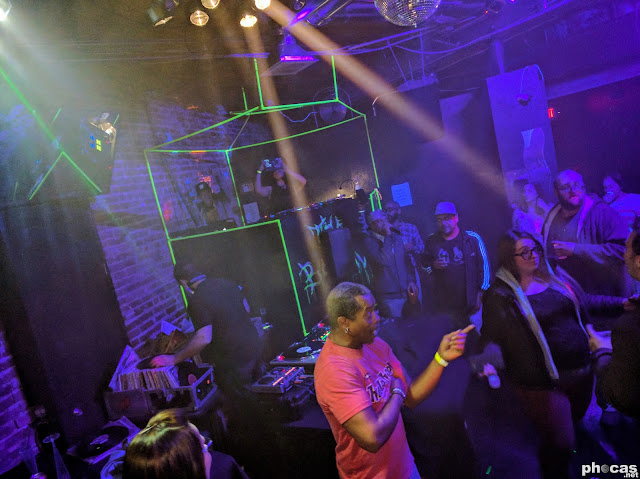 Local DJ Pint Size kicked things off this evening with some solid House music from the upper decks. The little Batcave was just beginning to fill, and although there were not many folks there, heads were bobbin’, and a few random folks made it out on the dance floor. It was so good to hear her play again, and she definitely set a good tone, playing some quality tracks.

Next up on the lineup, DJ Proof took over to show off his skills in the fine art of turntablism. It was a bit of a rough transition from what had been playing previously, but he had some good tricks and tracks up his sleeve. Things were beginning to gather a little momentum too, and a few more folks were staking out their space-claim on the dance floor for main event. 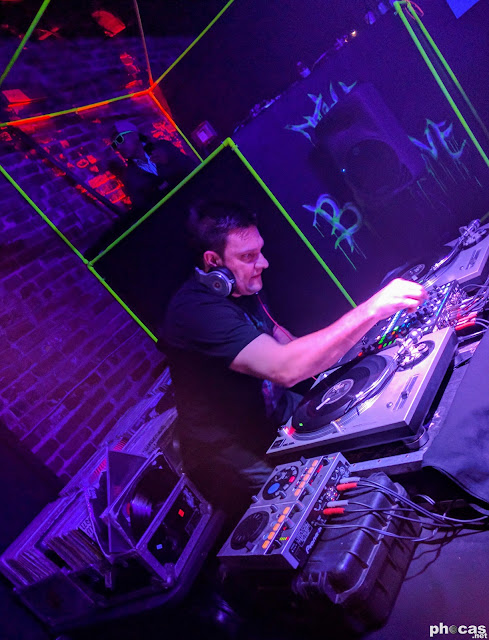 DJ P played off DJ Proof to open his set, and immediately ripped through a stack of favorites that quickly crowded the dance floor. Track after track, he kept folks on the floor movin’ and groovin’ throughout his entire set, myself included.

Indeed, I think I ignored most of the folks that met up with us there earlier, as soon as I knew he was on. I did not stand transfixed though. It started that way, but feets gotta move when they get the groove, and several old friends joined me in my most perfect position for the show, right up front. 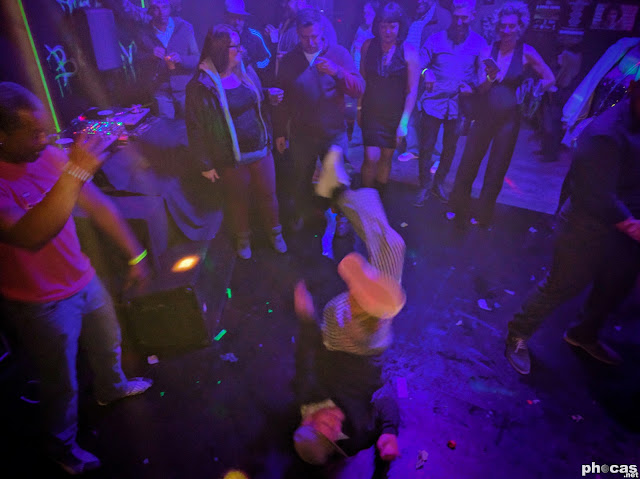 I was a little amazed he pulled it off so well. They had him on his a separate setup on the dance floor. As much as folks were bouncin’ to the beat, I was certain things were going to fall apart, records would skip, or something. It never happened. He kept things moving and the needle solid on the wax all night long, and keeping folks dancing.

Closing out his set, he played back and forth with Tony Markham for a bit, who eventually took over to close out the night about 1:30 am. He is one DJ I have always enjoyed hearing as well. He always seems to have the right tracks for the right time. I miss hearing him play. The last few times I have been out, it seems like I always miss his set though. Either he just finished, or he is going on too late; just poor timing on my part, I guess. 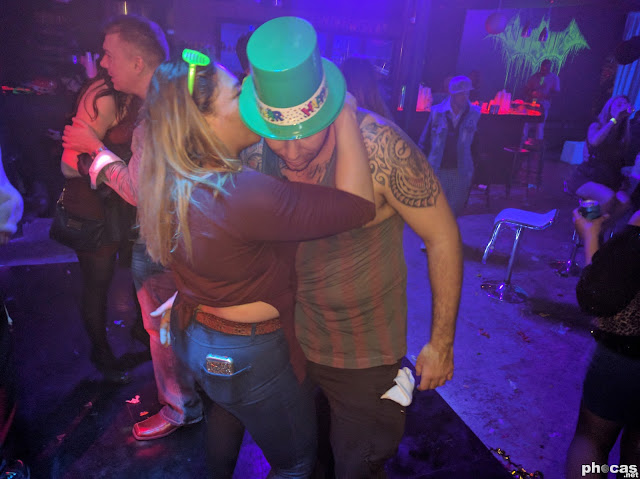 This evening turned out no different. We were intent on staying for all of his set, but the night had been too long already. Having arrived just after 9 pm, time and other factors were beginning to take a toll on the ability of some in group to stay conscious. In addition, management at Rhythm & Booz decided to shut off the water, forcing everyone to begin purchasing said substance for $2.50 / bottle. That was kind of a rude thing to do. They really should try to take better care of Designated Drivers at their establishment, especially on a holiday such as New Year’s Eve. 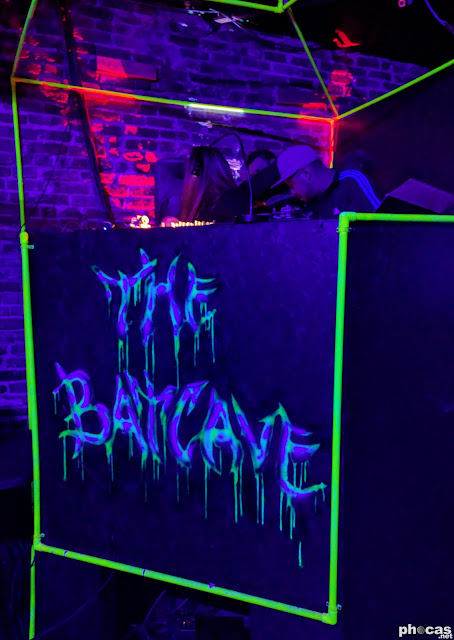 The Batcave is a fun little spot with its own funky little groove though, and definitely worth a return trip, for the right tunes. Decked out in black light and neon, I am not sure if it is always that way, but it fits. The bartenders were awesome too and very attentive. We had a great time, dancing in the New Year with friends we had not seen in long while. We definitely look forward to doing it again soon!

view more photos from this event
or add your own to the mix!
edm KC
Location: The Batcave at Rhythm & Booze, 2111 Washington St, Kansas City, MO 64108, USA