While visiting Chicago, I enjoyed the opportunity to catch some live music at one of my most favorite venues in the entire US, Millennium Park.  Along with a couple of thousand others lounging about the lawn Thursday night, it was a great evening of music at the Jay Pritzker Pavilion, as part of the 2016 Millennium Park Summer Music Series. 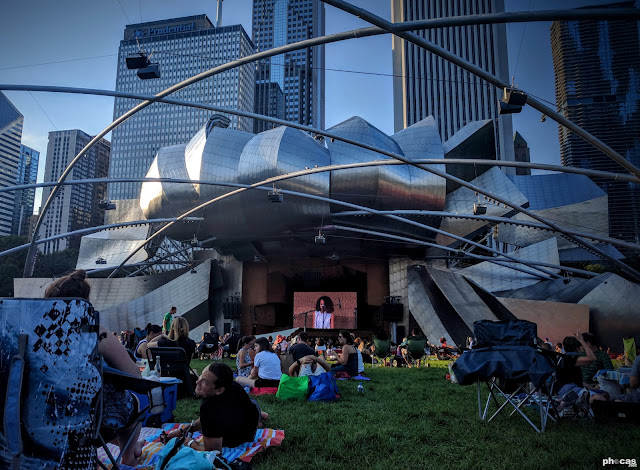 It was a near perfect evening for the event.  Temperatures got up around 33 C earlier in the day, but relief from the sun comes early in the park, thanks to the skyscrapers to the west.  As with everyone else, we made a stop at the grocery for a few essentials first, and arrived just as the sun was beginning to fall behind Fornelli Tower, casting one long wide shadow across the lawn near the stage.

Solo recording artist Sinkane started the evening off about 630 pm, with a blend of free jazz and funk rock with a Sudanese twist.  It had a little bit of reggae / jam-band feel, and was definitely something everyone seemed to really like. 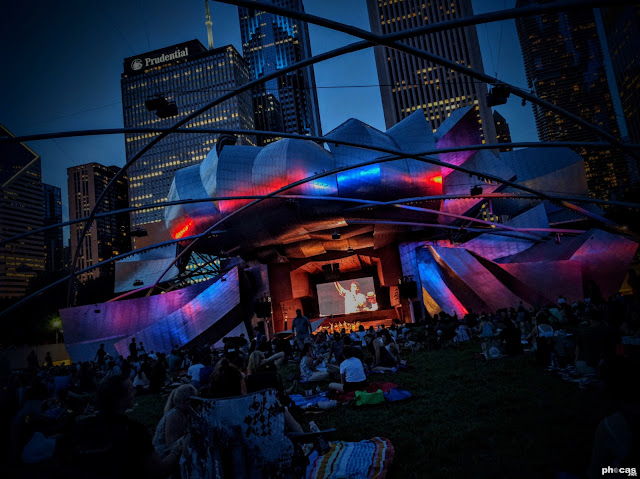 Mark de Clive-Lowe took the stage next.  A musician, composer and producer, originally from New Zealand, he is a veteran of the UK Broken Beat movement, blending jazz, electronic dance music, funk and percussive heavy world music to create his own unique sound.

The show ended about 9 pm, and we packed our stuff up and made our way back to the streets of Chicago.  It was surprising to note that the park not littered from one end to the other.  Folks just seem to have an unusual level of respect for this space.

I suppose that is part of what makes this venue so great.  Well maintained by the people that use the space, everyone always seems generally respectful of the environment.  They pack out everything they bring in, and enjoy their time there peaceably.  I have never seen the sort of trash clutter at this venue I have witnessed at other outdoor venues with much stricter entry policies; ironic, indeed!

All of this in light of the fact that it is so free and open.  Folks haul in their coolers, blankets, chairs, min-tables, and their favorite beverages, whether they in glass or not.  There is no pushing and shoving to get in the door; no fighting over seats, no rudeness.  There is no overtly paranoid security groping you and violating your dignity as you enter, divesting you of your favorite beverages.  Who cares?  The only thing not allowed, smoking.  Take it to the side, and off the lawn.  Otherwise, everyone just shows up and finds a piece of grass that suits them best.

If you missed this show, there is always the video montage below; otherwise, there are few more shows slated for the remainder of the summer.  Check the listing below from the the City of Chicago web site, and get out there and lounge around on the lawn!


Elephant Revival are a quintet from Colorado whose sound encompasses elements of gypsy, rock, Celtic, alt-country and folk. Mandolin Orange is an Americana folk duo from Chapel Hill, North Carolina whose music has received critical acclaim from NPR, American Songwriter others.


Throughout its 25-year history, Chicago-based post-rock instrumental quintet Tortoise has nodded to dub, rock, jazz, electronica and minimalism throughout its revered and influential, six-album discography, but the group’s resulting sound continues to defy easy categorization.  HOMME is an experiment in voice and sound by Sima Cunningham and Macie Stewart who joined forces in 2014, inspired by the free improvisational music scene in Chicago, and influenced by folk and avant-garde rock.